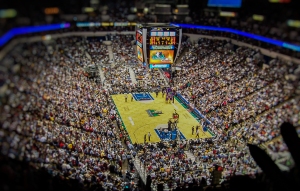 This is an interesting photo for a couple of reasons. The first is that this capped off a great sports weekend in Minneapolis in 2004. It was May and in the span of two days I saw five sporting events. I saw two baseball games between the Minnesota Golden Gophers and the Ohio State Buckeyes Saturday morning. From there I went to the Metrodome to watch the Twins play my White Sox. The next afternoon I saw the White Sox whip the Twins to cap the baseball off. From there I ate in town before going to see game two of the Western Conference Finals between the Minnesota Timberwolves and the Los Angeles Lakers. At a time when I was not getting out too much it was a great weekend away from work and my apartment. The second great thing about this game is the fact that several future NBA Hall of Famers were playing in it. Minnesota had Kevin Garnett who has since left for Boston. The Lakers were loaded with two stars ending their careers in Gary Payton and Karl Malone, and two in their primes in Shaquille O’Neil and Kobe Bryant. This was a lot of talent on the floor, and a great reason to pay to get into the Target Center that night. The T’Wolves won the game which was nice to see the home fans get what they want. I had no real dog in the fight so I rooted for the home squad. I felt that I had to because of the noisemakers anyway. I couldn’t beat them together if I was rooting for L.A. You can see them all over the arena in the picture. This was a nice way to cap off a great weekend.

I picked this photo out specifically so that I could use Focal Point 2.1 which is part of the On One Photo Suite 7. I bought this program shortly before heading to Colorado, and I really have not gotten too much into it yet. I was part of a webinar on it Monday morning though so I picked a few things up. I really like the fake tilt shift look that Focal Point allows you to do so I wanted to try it out on something. This shot seemed to be a perfect candidate. Before sending the photo to Focal Point I made all of my adjustments in Lightroom. Then I made a copy of the photo to send over. This was the second image that I played around with in Focal Point. It took some getting used to the controls, called ‘the bug’, but in the end the program is very simple to use. I just picked where I wanted the focus to be, and then the program does the rest. I did use the brush in the program to ‘paint in’ focus on the scoreboard. I think that it gives the arena a little more of a toy feel that way. This program has some promise, and I think that I will try and get some shots in the future with it in mind.