My Favorite Celery Bog Photos From 2022

A few years ago I found this amazing place just outside of campus. There was an amazing amount of wildlife there for some reason. I went through a period where I was there nearly every day. This year I went far less than I have in a long time. I even went more during the year everything was shut down. I think that on some level I started to feel like I was just making the same photo over and over. This year I would like to get out there more just for the walks that I would go on. I can be more intentional with my photos on those walks, but I still should get out there more.

My lone trip to the bog in January was to see Ruby the resident eastern screech owl. There is a special time of year where the light is amazing on her as it sets. Here she even gave a look towards the camera.

On a cold February day I made my favorite kingfisher photo that I have ever made. They are normally very shy, but this one came close enough to me to make this photo. It was a stroke of luck, and my favorite photo that I made in February.

With the weather warming up a bit in March I made my way out to the bog a few more times. Here I found a new owl in Ruby’s hole. A gray morph eastern screech owl. These two screech owls would show up in a different part of the bog later in the year with a couple of young ones.

I don’t usually get a chance to photograph the pileated woodpecker up close. This one was searching for food though and could care less about me. That is always a good things as it gives me a chance to make some photos.

In March I thought that I was extremely lucky to be there on a day when two pelicans came through. In April we had a day where hundreds of them were there. You would think that you would want that many there for photos, but what I found was that there were so many that I didn’t know where to point my camera. I got lucky a few times though and made some photos of the pelicans tossing their meals. This was my favorite.

We don’t get to make many pelican in flight pictures here in Indiana. When I had the opportunity in good light I was very pleased. They were fun to watch, but in the few days that they were here they really fished the bog. I think that for the sake of the other critters at the bog they could visit every few years.

By the end of April the spring colors are coming in nicely. Both in the green that starts to show up in the woods and the warblers that migrate through. On this day I stopped to talk to a fellow photographer/birder when they heard the northern parula. They moved on, but I stayed to see if it would come down from the treetops. It did, and I was able to make some photos that I really liked of it.

This prothonotary warbler posed very nicely for me one day down by the waters edge. I don’t see these birds very often, but I am always surprised at how they just show up in the best places for me. 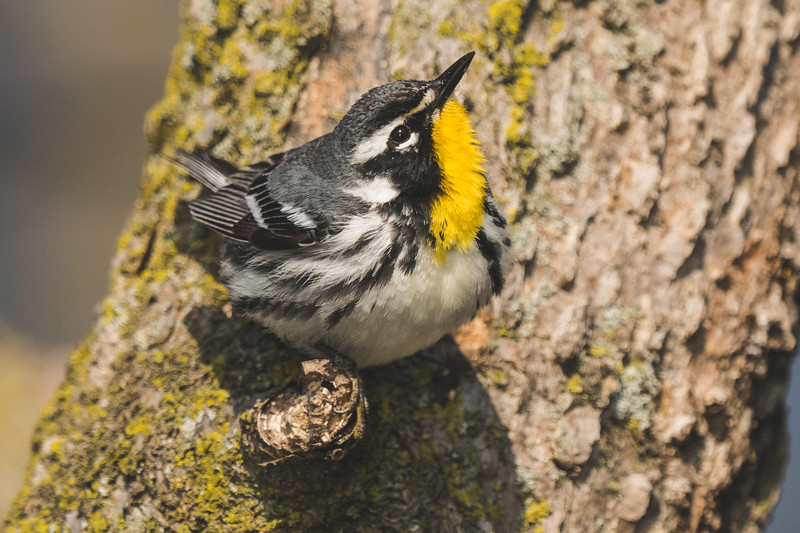 I put this photo on here just for the sake of patience. This bird was all over the place on bad perches or photos with a bad background. I was stubborn and I waited on it when everyone else was chasing another bird down the trail. It ended up giving me a nice pose. 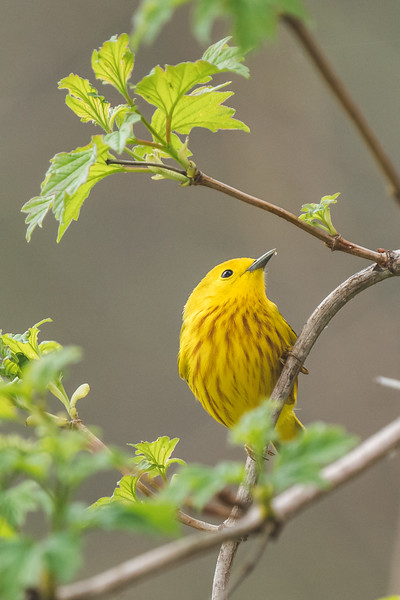 The yellow warbler is one of my favorites to photograph. After a long winter with little color these little guys are a sight for sore eyes.

The yellow-rumped warbler is by far the most common warbler the visits the bog. When it is in a beautiful redbud tree I will make the photo though. They are common for a very short period of time every year. By winter these photos with all of the color in them just look amazing to me. 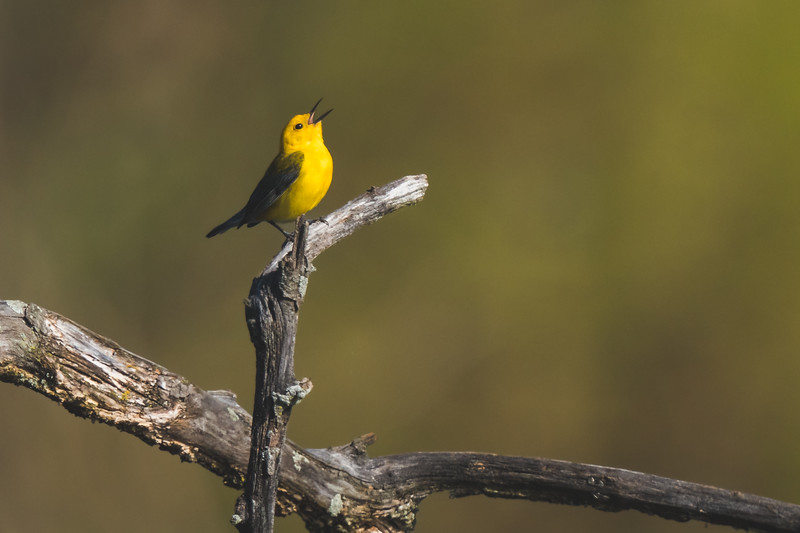 Another prothonotary warbler doing something cool. This one was working its way towards me and singing one day out at the bog. I have closer photos of it, but I always liked this one a little more.

It is not the best photo. A baby screech owl and its dad is a cool photo though. One days while walking through the woods I saw Ruby, her mate, and two babies up in the trees. The light was not right to make a photo, but I wanted something to capture the moment. I don’t know what every came of the young ones, but I hope that I see them again.

My favorite warbler is the palm warbler. For some reason I just like that combo of brown and yellow on it. Here one gives me a pretty good pose.

Last year I had so many good encounters with the green herons. This year I had only one, but it was a great one. After fishing on the opposite shoreline that I was on it flew over within a few feet of me. After watching me make photos of it for a couple of minutes it was off. It was a brief encounter, but a good one. 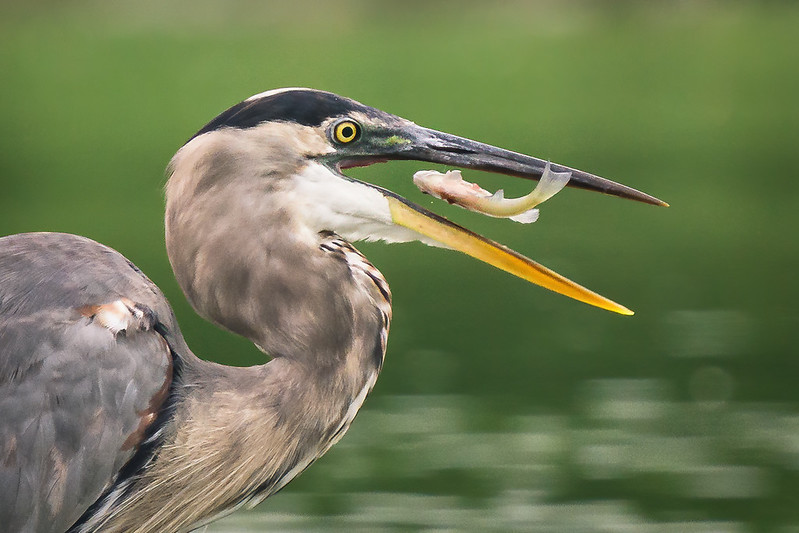 Normally I spend a few days a year just making great blue heron fishing photos. This year that just did not happen. I watched a few scratch, but I only had one day where one was fishing. If I only had one to photograph though this was a good one. This heron caught a few fish and kept working its way closer to me. This was my favorite photo from that encounter.

This sandpiper was flipping a bee preparing to eat it. I don’t know how you eat something with a stinger, but it didn’t seem to mind. 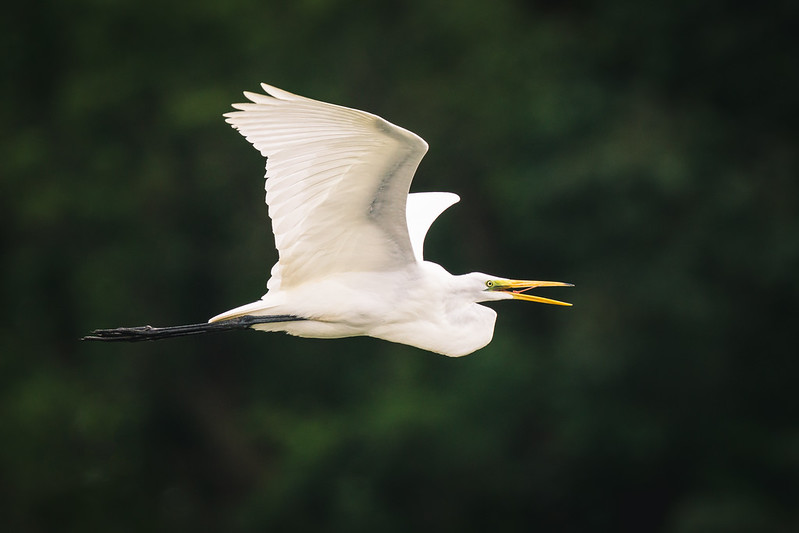 At the right time of day you can make a pretty good in flight photo of a great egret. Things just look great with the background and a little backlighting on the bird. I didn’t make many photos at the bog in September, but this was one of my favorites.

In October I found this beautiful background with a few sticks in front of it. I stubbornly stood in the same spot for far too long waiting for anything to fly into my frame. I thought about leaving a couple of times, but convinced myself to stick around. I am glad that I did as I was able to make this photo. There are times that it pays to be stubborn, and this is one of those times.

I thought that it would be neat to start and end this gallery with Ruby. Here she warms up in her hole in October. The background was beautiful so I waiting for the light to filter through the trees to hit her. This is a different photo than I have made of her before so that is always good.

Of course after I wrote this I went out and made another photo of Ruby. Here she sits in her cavity on a super cold morning. The sun was just starting to peak out from behind the clouds which had to feel good to her. I could always go back to my car to warm up, but she has to rely on mother nature to help her warm up. I was sure that the sun felt good to her so I told her Merry Christmas and headed back to my car.

As I said at the beginning I was not out at the bog as much as I used to be. When I did go out there though I always seemed to be rewarded with something amazing happening. To be fair I think that something amazing is happening out there every day. This year I need to get out there more to see more of it.

Tomorrow I will take a look at my favorite Purdue sports photos from 2022.