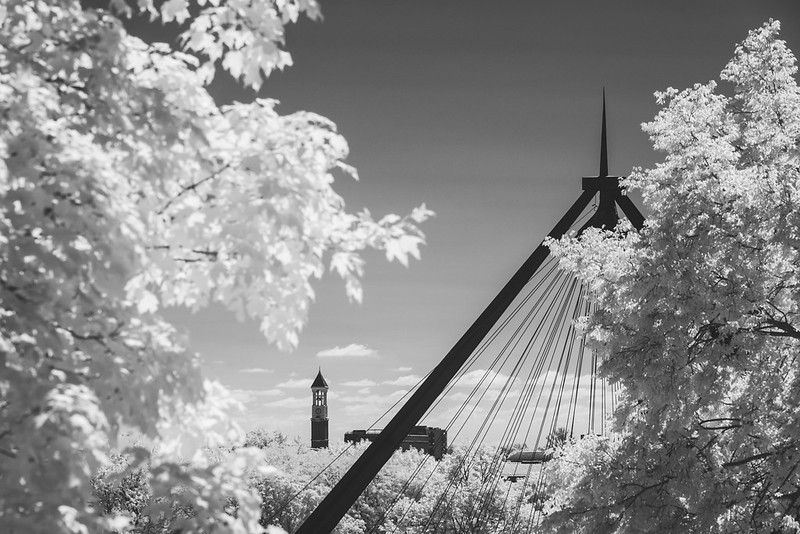 Making Pictures While You Wait

The other day I was up on campus waiting for the arrival of the MV-22 Osprey that was supposed to fly over. It was a strange time to be on Slayter Hill. A homeless guy was asleep on the hill, and an older couple was making out on a bench by the port-a-johns that were set up for the football game. At one point the homeless guy woke up and went to the bathroom right behind them, but it didn’t deter the couple. I felt weird just sitting in my car so I grabbed my infrared camera and my 70-200mm lens to try and make a couple of photos. When you have a plan that has a low chance of succeeding having a photo in the can before the main event starts is always a good idea. When you have to post a photo a day you always need to be thinking ahead. If my main photo had turned out I would have had this for a post down the road. As it is you get to see it today. I really need to get out and make some photos with my infrared camera while the leaves are still on the trees. I have this crazy idea to also use it in the fall to see how the different colors show through. I assume it will be the same, but it will be a fun day to get out and try some things out.

I had this vision that because it was coming in as part of a publicity campaign that it would come in over campus with cameras in it rolling. If it flew over the engineering fountain and the bell tower it would be right in line with where it was supposed to land. Of course none of that happened as it came in from the south and then banked west taking my photo idea away. It was a good idea, and if things had gone the way I had hoped it would have been a cool photo. You win some and you lose some, but at least I have this photo to show for my time there.