Closing Out The 2022 Big Ten Swimming And Diving Championships

A four day event like this one can really be a little bit of a grind as you are always getting up for a session it seems like. I like to make sports photos though and I can never seem to get enough. Having a bunch of great athletes doing great things for four days is a dream. I woke up Sunday morning ready to check the heat sheets only to remember that it was all over. I have been lucky enough to cover a few of these over the years, and I hope that I at least have one more to go before it is all said and done.

Fun During The Anthem

I had an idea for the anthem from night one, but over the course of the week it never panned out. My swimmers were never on the blocks to try it out. On night one I made the best of the situation for a photo that I liked, but I wanted to see this one though. With the senior recognition going a little long they had the 1650m freestyle swimmers just head to the blocks right before the anthem, and I knew that I had my photo. I just needed the swimmer to turn a little. I got my wish, and photo. It was worth the wait.

As I talked about yesterday you can lose focus while waiting for two of thirty divers to dive. I try and keep sharp by messing around with panning during a few of the others dives. I went up top to make some photos for this session as I usually do. With a little extra height also came a cleaner background. Here Tyler Downs hits the water during the platform diving competition.

I used to have an idea that I would make the best available photo when it presented itself. It may not be for the team that you are working for, but with no other photos to make you should just make it. That was the case here as an IU swimmer came by me. I saw this earlier and knew that I had to make this photo. It is one of my favorites from the weekend for many reasons. 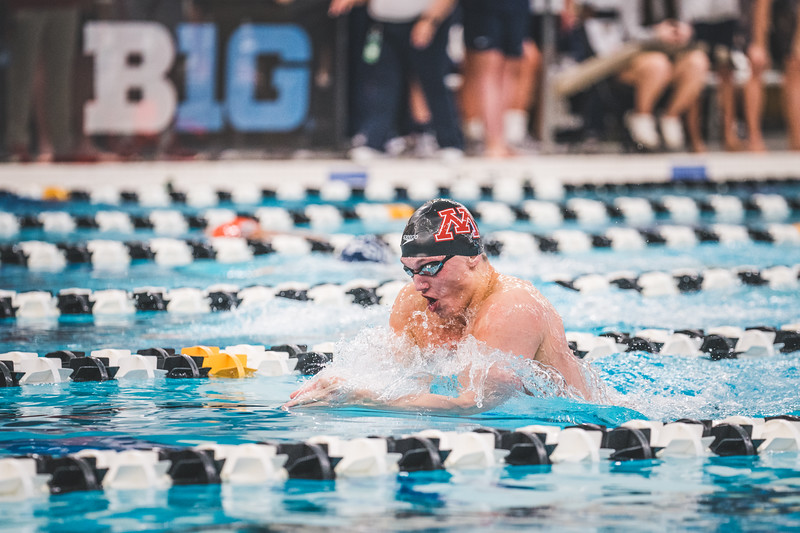 Max Does It Again

Max McHugh had another big night winning the 200m breaststroke. He really was the class of the field setting a couple of records in the process. One of those records was set at the first Big Ten Championship that I covered here in 2016. Records are made to be broken, and it is always cool when it is an athlete that I am covering that is breaking those records.

After the final relay I was at the podium making photos of my athletes. The top three teams were getting photos made of them as I walked by with the team to make a team photo. As we walked by Indiana they were presented with their team trophy for winning it all. I was even with the team as it happened and I made a few photos. Everyone else was occupied at the podium so it was the easiest trophy scrum I have ever been in as it was just me. I made a couple of quick photos and then moved on to my duties. I have made better trophy photos, but for just having it fall into my lap I was pretty happy.

I have been blessed over the years to cover a few of these Big Ten Swimming and Diving events. This one seemed a little more special. After the past year I have felt like I have been put out to pasture a little bit. This weekend I found a team that gave me a chance to help them out. That is all that I have really ever wanted to do in this business. It was never about being famous or being an influencer. It was always about just making pictures and helping build something really cool. For a weekend I was back doing that. With the season change comes some more opportunities to do that in the coming months. Making photos is one thing, but when there is a purpose behind them it makes it so much more rewarding. To find a school that values what I do was really great this past weekend. It was a much needed confidence booster. This is what I love to do, and I still think that I have something to offer. I had a lot of fun over those four days, and I am sure that a best of post will be coming soon.