Day Two At The Pool

At the halfway point I will say that I have been having a blast making photos for Minnesota. After a winter of kind of being stuck in one spot for basketball it is great to get out and stretch the creative muscles so to speak. At the pool I have a few options of where I can go, and what I can do to cover a race. During the prelims I am usually a little more conservative to make sure that I have photos of all of the athletes. If I succeeded in the morning then I can play a little in the night session. A photo like the one above is an example of that. With the crowd cheering my swimmer is a little small in the frame, but it also show a little sense of place. As the championships move on I hope that I can get even more creative with my photos.

Put The Camera Down

One thing that Sony has really made easier are the very low photos that I like to make. In the old days I would have to have my head down with the camera as I was making photos. With the flip screen I can be semi-comfortable while having the camera down on the deck. This makes photos like the one above easier to make. With the camera lower you get a more impactful photo. 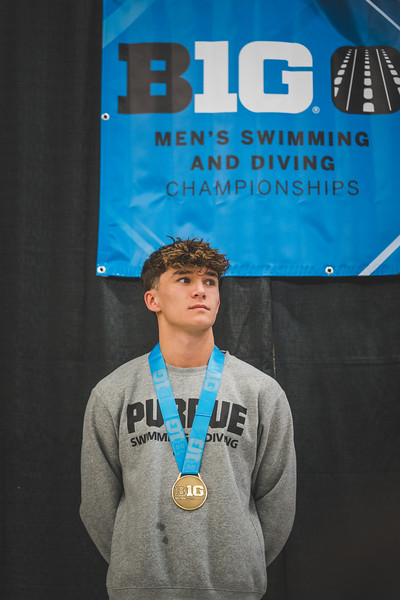 During the diving competition I spent most of the time editing because I had nobody in the finals. I did go out and watch the end though because the crowd was really into it. I love the atmosphere of the Big Ten’s so why not soak some of it in. Purdue freshman Tyler Downs won a bronze medal for the 1M so I made a couple of photos of him on the stand. Even though I am not making photos for Purdue I can still sneak a couple in for myself from time to time. This seemed like the first of many podiums for Tyler so I wanted a couple of photos of that.

The hardest stroke to photograph by far has to be freestyle. The swimmers head is almost always in the water, and when it comes out of the water it is only to take in as much as it can in a short period of time. That does not always make for the best photos. Here I had my camera just above water level to try something different with the stroke. I like the angle, and it is something that I will play with as the meet progresses.

As I write this I am halfway through this championship. These are always fun events to make photos at. The emotion of the athletes really adds to the event. The way that this has been run makes it fun as well. A normal dual meet seems like it can go on forever. This seems to just fly by the way that they get the swimmers in and out of the water. Hopefully in the next couple of days I can bring you a few more emotional photos to show just how much fun these athletes are having.