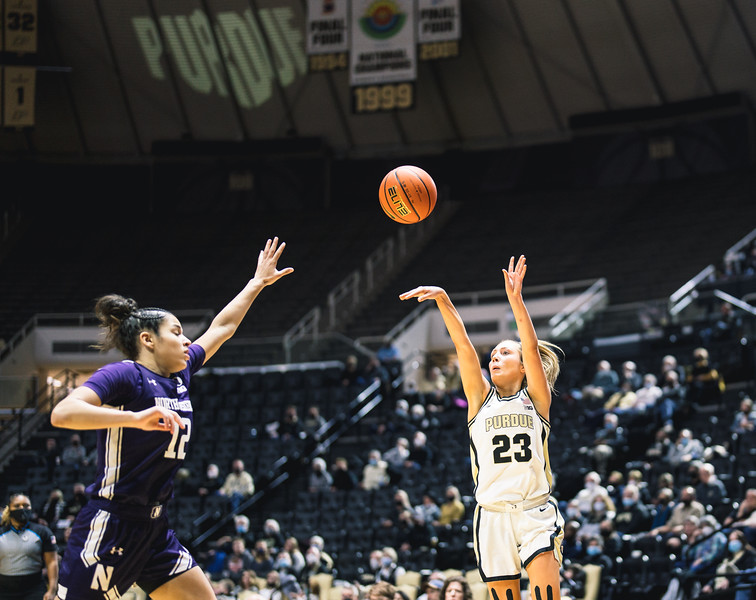 Friday night I photographed Thursdays Purdue women’s basketball game against Northwestern. This game was a casualty of the winter storm that ripped through our area. The roads were still not the best, but I was surprised by the crowd that made it into Mackey Arena for the game. It was not the Boilers night, but sometimes that is how it is.

I decided to have some fun pregame with my photos and photograph from some places that I have not been yet. I loved the laid back way that the players were watching the pregame intro video. This was one of my favorite photos on the night because it was just different from what I have been making this year.

I have been dying to try this lens out for a while now. I finally had my chance this week, but of course it was scheduled to be delivered on Wednesday when the storm hit. Luckily UPS was on the ball and still showed up to my house with it. I had some fun making snowy photos with it, but I also had a chance for the two weekend games with it. When you hit at f/1.2 it produces a photo that is amazing. You also realize when you just miss much more though. It will be a fun lens to have some fun with.

I put together a gallery after the game because I knew that this post was going to come so long after the game. You can see my full gallery from the game here. I was not changing up looks very often because I was having to much fun with the 50mm lens. Tomorrow you will get a look at my photos from the Purdue men’s game against Michigan.