My Five Favorite Photos From The Purdue Matchup Against Illinois

I don’t know how often I will do this, but I am pretty excited about this game. I think a lot of it has to do with the fact that it has been a couple of weeks since we have seen the Boilers. Usually at a big school like Purdue you get at least two games at home right off the bat. This year though we had the exciting home opener and then no football for a couple of weeks. Tomorrow should be a good game, and I hope that I can make another photo of Purdue holding the cannon.

5. We start here. This is what it is all about. At the end of the game you want to see the Boilers holding the cannon. Here some extra football gave us a great blue hour light to work with. In the scrum with the cannon I was trying to find the photo that told the story. Here the scoreboard and the cannon tell you everything that you need to know.

4. This photo is here for sentimental reasons more than anything. This was from 2013 which was my first season on the sidelines. It was also made with my new at the time Sigma 300mm f/2.8 lens. I only used that lens for a year or so, but it was my first big step into big primes. At the time I really thought that photos could not get better than this. My excitement about it is why it shows up here. 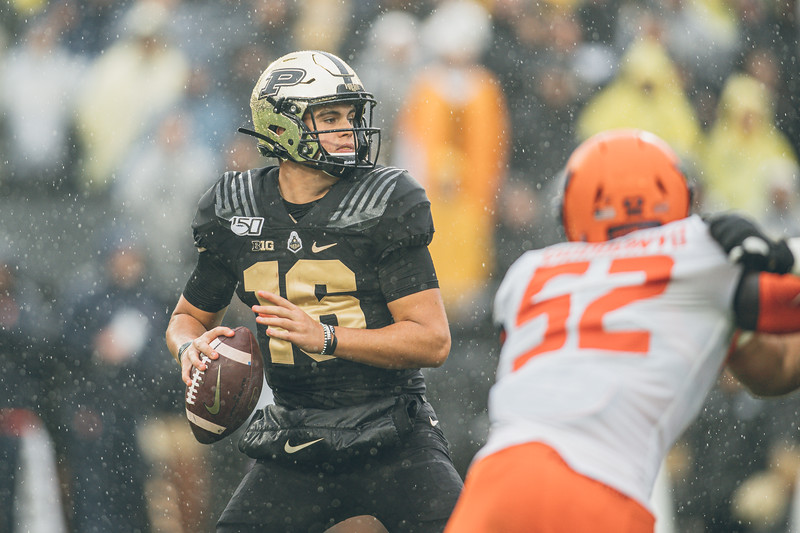 3. The last time that these two teams played at Ross Ade it was in a rainstorm. I would like to say that I was upset, but I actually like making photos in the rain. I just love the look that it gives. Looking through these rain photos gave me an idea for our next rain game that I will have to try out.

2. This is a fun series to show what it can be like when you are alone on the road. The last few years at Purdue I have been lucky enough to be on a great crew. Just the nature of many photographers together means that your gallery will have a few different looks. When you are on your own you have to do that yourself. After a touchdown I captured the initial celebration with my 70-200mm lens. That is the top photo. I have always liked that photo and the little glint of the sun coming off of the helmet. The bottom photo I made right after that moment to show more of the stadium and the environment. Two photos not too far apart that help tell the story of the day.

1. The final photo in the countdown is a total copy job. Years before I made this photo Paul Sadler at Purdue made a similar photo with Ryan Kerrigan rushing the passer in the rain. This was my feeble attempt to recreate that photo. Big George is a fun player to watch, and hopefully I can make a really nice photo of him during this game as well.

So those are my five favorite photos from this rivalry so far. I am writing this early in the week, and I cannot contain my excitement for another Saturday at Ross Ade Stadium. I can only imagine how I will be on game day. This is a fun game played for a cool piece of hardware. Hopefully the Boilers can be the team hoisting it at the end of the day.