An Interesting Way To End The Season

Sunday Purdue took on Minnesota in a doubleheader to end their season. With senior day in between games it was a very interesting way to end the season. Win game one Purdue had on the gold tops which I had not seen in person this season. We get so few games up north that I am sure there are a lot of uniform combinations that I never get to see.

I had my 85mm lens with me to try some portraits of the players in the on deck circle. I really only gave it a go for a half inning, but I was happy with how it turned out. This season we were stuck in the stands so I kept trying to come up with ways to show the players a little closer. I think that this lens and this combo has a possibility of staying in my bag next season.

Hoping For The Best

I was hoping that when senior pitcher Cory Brooks came out of the game that he would be further along on his walk when he tipped his cap. The more poplulated section would have looked much better. Sometimes though when you gamble on a photo you miss. With this group of seniors I was hoping to give them some good memories of their time at Alexander Field this year. They went through a lot with some of them thinking that a virus had taken their senior season last year. They battled back to the field though and gave us some great memories this year. 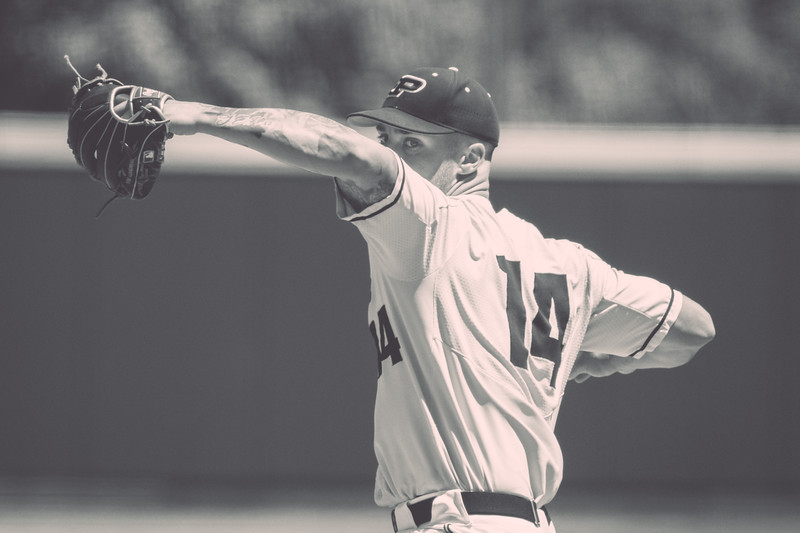 Today the blog has been busy with a lot of content. I have been trying to get my galleries out on here quicker than the game stories. This morning I put out three galleries with that in mind. You can see the galleries from the Sunday games by clicking on game one and game two. An amazing sectional title game last night meant a third gallery went up this morning. Over the next few days I will be putting up the game story posts, but another game tonight meant that I had to have a busy day of content today. That is never a bad thing I guess. I would not mind a few baseball games a week. With the Purdue season over I would guess that a season wrap up gallery will be coming in the next week or so.