Purdue Wins An Exciting Game Two Of A Doubleheader Saturday

Saturday I was not sure if I was going to stay for both games of the doubleheader. The first game was a fun one, and I thought that I would just stay for a bit of game two. Of course game two was an amazing game and I am glad that I stayed for all eight innings. Out of the three games this past weekend this was by far the most entertaining. It had a little bit of everything. It was also my best game from a photography standpoint.

Heading into the 2019 spring sports season I had set a goal to capture more details. Of course the season was cancelled and I didn’t get that chance. Being relegated to the stands makes capturing details a little tougher, but when I get a chance I try not to blow it. Here I thought that you had a lot of info all in one photo. I wanted to capture the tribute to Morgan Burke on the helmets. You also have the right player number which here is the current season. I love these little detailed photos to break up the gallery a bit.

The Player Of The Game

For some reason it seems like a certain player will dominate a gallery. That player on Saturday was Becca Jones. For some reason the camera just finds a player over and over. During the course of this game I kept finding myself with pictures of her. Then she drives in the winning run, and the photo that starts off this post was made. This season I think that I have been lucky in that a different player has been that camera magnet for most of the games.

This was a great catch by the Ohio State left fielder that kept the game tied. It was in foul ground, but it ended the inning which was big at that moment. I don’t always make photos of the opponent, but I was making this one as practice in following the ball. It worked out for the best. 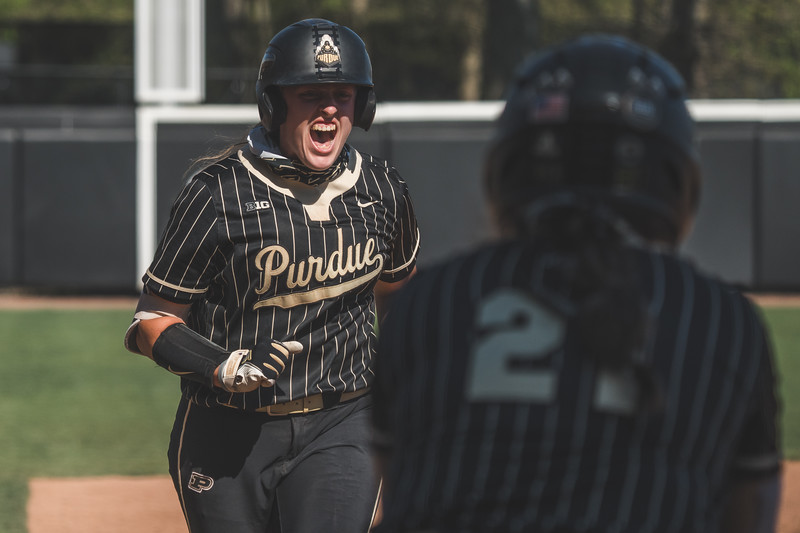 As I said above this was the most fun game of the weekend, and I had my best game I felt making images from it. You can see my full gallery from the game here.