Checking In On The Screech Owl

On Saturday I was checking in on the screech owl at the Celery Bog. When I first arrived the light was great, but the owl was not in the hole. I went down the hill and made the photos that you have seen on the blog this week. It was actually a good thing that the owl wasn’t there because I was able to get a short walk in and make some other photos. For most of my time with the owl it was still very sleepy. It was a lot like I feel in the morning. I am up, but I rarely want to be. There was a moment when a squirrel was below the hole when the eyes opened and for a moment I wondered if I would see something amazing. 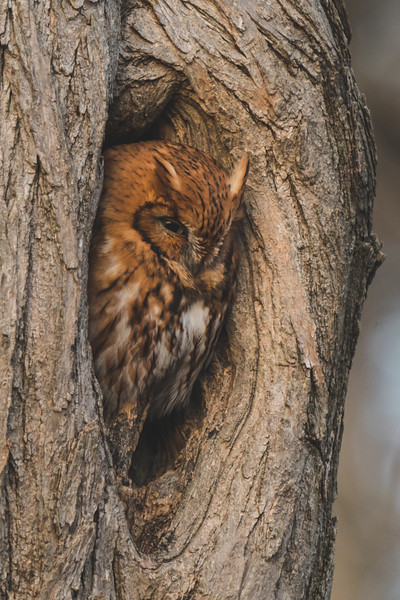 Staying On The Right Path

This owl picked a fairly busy place to chill out. There is a path very near the hole and a driveway not too far away either. You can be on the bike path and be very near this owl. For some reason though people still feel the need to get closer. Maybe it is the likes on Instagram or fishing for a nice comment on a Facebook photo. Even with a sign saying to respect the owl and stay on the path people have still tried to get up close and personal with this bird. The barrier of sticks was shoved back so someone could get in a few feet closer. At some point you have to stop and think about what your actions are doing to make the photo.

2 Replies to “A Napping Screech Owl”