More than likely this would be my last trip to Ross Ade Stadium this year. Like everything in 2020 though that is not set in stone. There is a possibility of one more game in a couple of weeks. I don’t know how the home team is selected for that game so I couldn’t even comment on if that is a possibility. It still felt great to be back inside the stadium though.

I took the doubler to the game today to try it out when the action was away from me. I ended up leaving it on my 600mm lens for the rest of the game. I had a setup to switch to if the action got too close, and I liked the way I was able to get in closer with the 2x teleconverter on my lens. If I was needed every image to be great for the wire I might not have tried this, but for what I was doing this setup worked great for me.

This is a lens that I have been dying to try out on the field for a while now. I received my copy of the lens too late for football last year. Of course I planned on really using it for softball and baseball, but that never happened this year. I was probably a bit too far away to use this today, but with the 1.4x teleconverter on the lens it really got me close to the action. I would switch to this rig when the action came a little closer to me. For a photo like the one above I could zoom out a bit to make the frame that I had in mind. I really like the flexibility with this lens. Down low I would have noticed the bokeh a little more, but for the most part that did not matter yesterday. 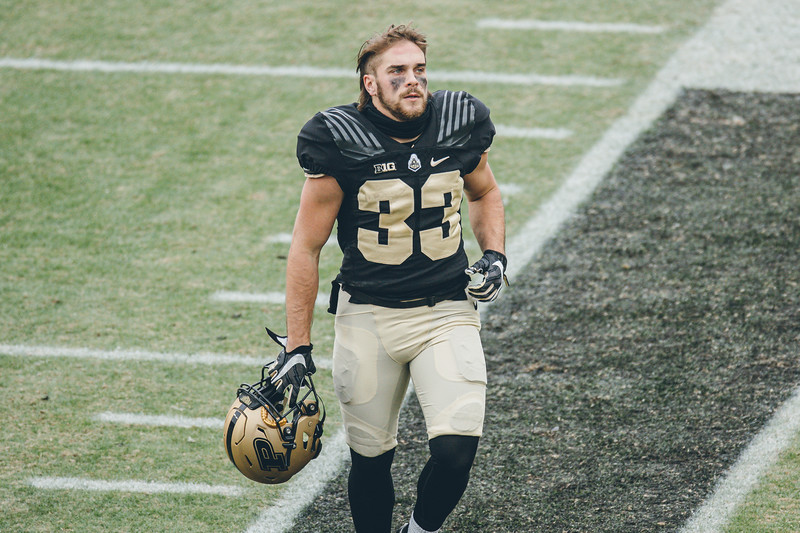 One Last Photograph Of An Anthrop

If you have read this blog for any length of time then you know that my first ever post on here was of Danny Anthrop as he played for Central Catholic across town. For the next few years football lined up nicely so that Danny could have the October 7th date on the blog. When he graduated I was lucky enough to have Jackson Anthrop to photograph. It is funny how much things have changed since this little blog started up in 2011. One thing that hasn’t changed though is the fact that there is an Anthrop out on the field hustling. 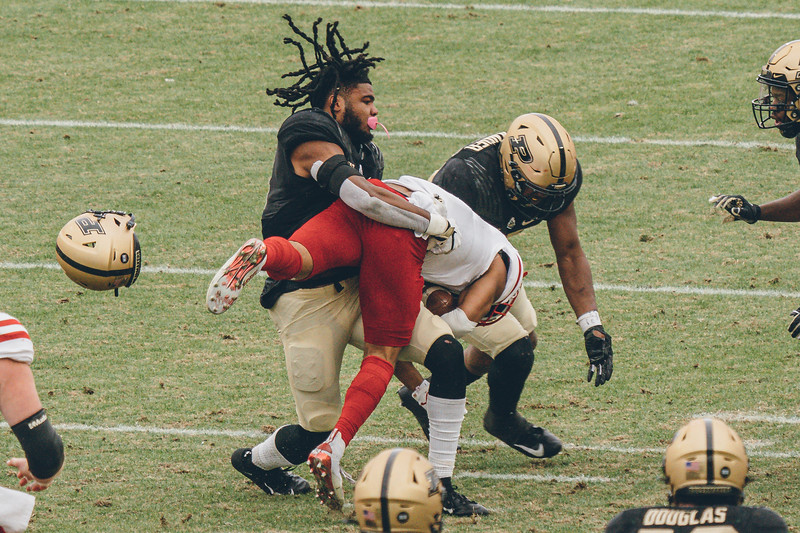 I only show this because everyone came out of this play no worse for the wear. An elbow to the facemark caused a helmet to come off mid play. This is never a safe moment, but it really lets you see the athlete in a way that you normally can’t on the football field. I am glad that everything turned out okay here though.

One great thing about this season is the fact that we were able to see Rondale Moore and David Bell on the field together. They are both great receivers in their own way. Together on the field they create problems for the defense. Yesterday I made my post about Rondale. You can see that here. I hope that we get a couple more years with David so we can see how many records he can break as a Boiler.

One goal that I had going into the first game for me this year was to make a photo of the tribute to Morgan Burke on the Purdue helmet. From the stands that is not as easy as I had hoped it would be. Today with the doubler though I was able to get a little closer and finally make that photo.

Photographing From The Stands

This has been an interesting year photographing from the stands. I used to do this a lot as a fan so it is not too crazy for me to do, but I miss the dynamic images that you can make down on the field. In the stands I find myself thinking about the game in a completely different way. I think the photos look better in a more graphically pleasing way. Using dead space and the field as my backgrounds. A clean picture like this seemed to stand out for me. Part of my job I have always said is to take the people into the action in a way that they can’t see. When you are making photos from the stands that job becomes much harder, but hey it is 2020. I was just happy to get to be inside of Ross Ade Stadium a couple of times.

This has been a year for history on this blog. This was the 25th anniversary of my first game in Ross Ade Stadium. Yesterday was also the latest game that I have seen inside of the stadium. In 2001 Purdue took on Notre Dame on the 1st of December. That game was of course postponed because of the events of 9/11. At the time I thought that 2001 was a crazy year. We still remember the day because of how many we lost senselessly. This year of course has been even worse. We are losing that many Americans to the virus everyday. It makes you really stop and think about what it important in life. Hopefully the science wins out and the vaccine comes sooner rather than later.

2 Replies to “Purdue Football vs. Nebraska”