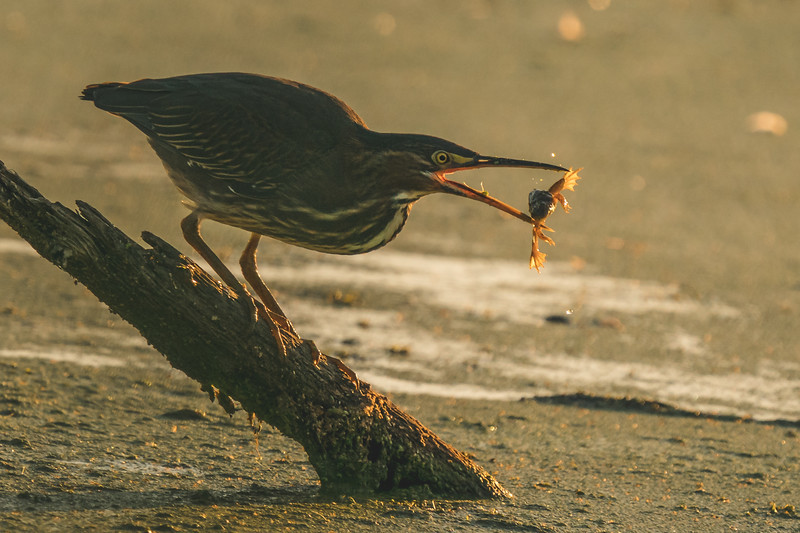 Getting Up With The Birds

It had been a while since I was up early with the birds. It just seems like so much was getting in the way of getting out to make photos. Lately though Saturday mornings have worked perfectly. The bog is much more crowded then, but early enough you don’t have too many people around. When you have an encounter like the one above you don’t want someone loudly walking up right when the moment hits.

It seems like a great blue heron doesn’t care what is one their prey when they eat. This green heron though kept washing this frog off in the water to get all of the algae and other things off of it before it went down. It was actually pretty fun to watch. The sun coming up on the other side of the bird also allowed for some nice backlit water drops to show up.

A Lot Of Luck

I don’t often see green heron this close. In fact when I came out of the trail I was amazed that this heron was so close to me, and that it stayed there. It could care less about my presence. It took a while, but the bird finally found something to eat, and it was at the perfect time. The sunlight had just started to show off the bird when it found this frog. Maybe it was the frog coming up to greet the day that ended up being a bad decision for the frog. No matter what a lot worked in my favor here to make this photo.

As always you can click on any photo on this post to go straight to my website. There you can see more photos from this encounter. It was an amazing experience, and I have a few photos from it up there.

2 Replies to “Breakfast With A Green Heron”