Early this morning I was finally successful seeing the Neowise comet. The prior few days a bunch of clouds or a stray cloud had obscured my view. I had never seen a comet before so this was a pretty cool sighting. I ended up at a parking garage overlooking the Tippecanoe County Courthouse to make a photo that I had hoped to make. At the beginning of the morning though things were not as easy.

When The Astronauts Show The Way

My morning started at the University parking garage. It was were I game planned my outing the night before. I knew that the comet would not be exactly where I wanted it to be, but I thought that my field of view would be good to start up there. I had no luck there so I moved to the garage across the street from the Union. My phone was showing me where the comet should be, but I was not finding it. All of the garage lights were hindering my vision. My phone vibrated telling me that a space station pass was coming. I decided not to photograph it as I had a bigger mission in mind. I would watch it though. The space station flew through the sky in what would have been a great photo going over a church. I was happy just watching it though. Then it flew right by the comet showing it to me. I want to thank all of those astronauts for showing me what I couldn’t find on my own. I made this tight photo of the comet with my 200-600mm lens with a 1.4x teleconverter on it. If this was the best that I could do I was still happy with my take. 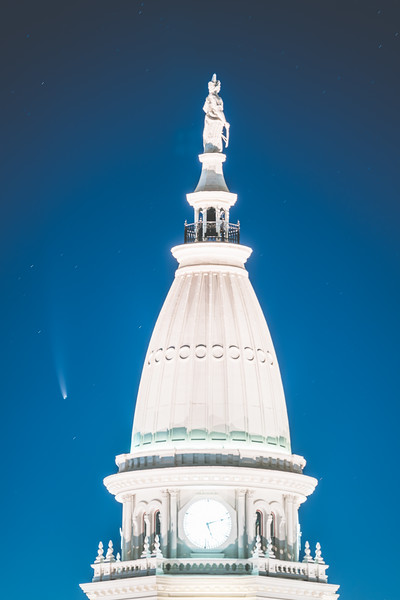 Looking at the direction of the comet I knew that I had a good chance of it passing right by the county courthouse. Sunrise was coming quick so I had to get there quickly. As I came over the bridge into Lafayette I really thought that it was going to line up for me. As I pulled up onto the top level of the parking garage I realized that it did indeed line up. I may or may not have done a happy dance as I exited my car. I quickly set up my sturdy tripod with my 70-200mm lens on it to make this photo. It was what I had in mind to do with some object. Looking at the colors in the sky I pulled the second tripod out of my car to make the photo that leads off the post. The wide photo is my favorite of the night, but I feel that this one shows off the comet a bit more. All together they all tell a story which is good.

As the comet was getting higher in the sky I decided to zoom in a little more on it. I took the 70-200mm lens off of my camera and put the 200-600mm lens back on it. The sky was already starting to get bright with the day ready to begin so the comet is not as bright, but I like how this looks.

There was a brief sweet spot where the sky had some great color and the comet was still fairly bright. That was the time to go crazy making photos. Here I zoomed out a bit to allow more of the golden light to creep into my image. If you cannot tell by the way that I am writing this post this was an amazing experience. In a couple of days you won’t even have to get up early to see the comet. It will be present after sunset as well. I am still glad that I made time to see it in the morning though. It was a great way to start the weekend. Now I am off to take a nap.