The New Purdue Video Board Gets Lettered

Yesterday the letters were put on the new video board at Ross Ade Stadium. While walking by the site a few weeks ago I saw the large letters and immediately had an idea for a photo. For those last few weeks I have been watching the web cam of the site to see if the letters moved. Last week they did. Yesterday the cam was shut off so I had no idea what was going on. I drove down to campus though and saw that they were indeed setting the letter up finally. I made some photos, but my idea would not happen until later. I came back around 5 and finally was able to fulfill the idea that I had at least a month earlier. I wanted a photo of one of the workers next to the letters to show just how big they are. Thankfully this man and his level allowed me to make a photo similar to what I had in mind. Now I can finally rest.

I have been walking by and making photos of this thing as it has gone up. I never went out of my way until yesterday to show up, but when I was in the area I would snap a photo to show that moment in time. The idea was that when it was up for a few years that I would have some progress photos. Yesterday seemed like a good day to really put some time into the project. I love photos like this one of the letter being put in place. With campus always changing one thing that I have decided to try and do is to document some of that change over time. This is a good place to start.

Waiting On The P

My goal was to make photos of the Purdue P being put into place. The other letters are nice, but the P is the letter that Purdue uses all of the time. Without a webcam I had to make a judgement call on when that P would be put into place. I guessed right so I arrived just before they started hooking it up. I don’t know if it was on purpose, but I love that they saved the P for last. It was a great way to do it as the P finished everything off, and made the photos a little better.

The outside of the stadium is really starting to look good. This place is ready to host some football. Now all that we need are things to go the right way so that football can come back. 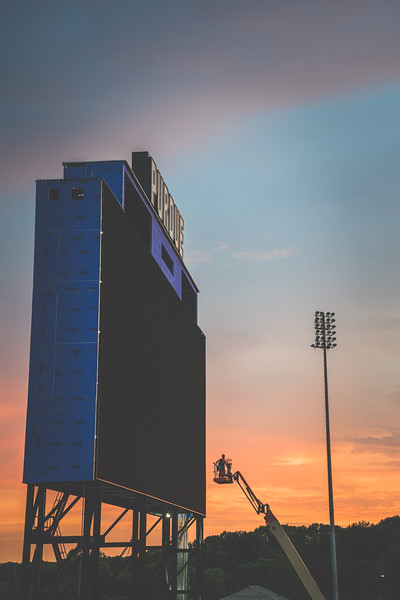 At sunset a few photographers and the local TV station came down to the board to see it lit up at sunset. A tweet announced that it would be lit up or so we thought. We all felt like fools when we finally realized that we had been punked. I did make this nice photo of one of the workers against the sunset though. It was worth the drive just for this photo to be honest. A motion P on the video board would have made it amazing though.