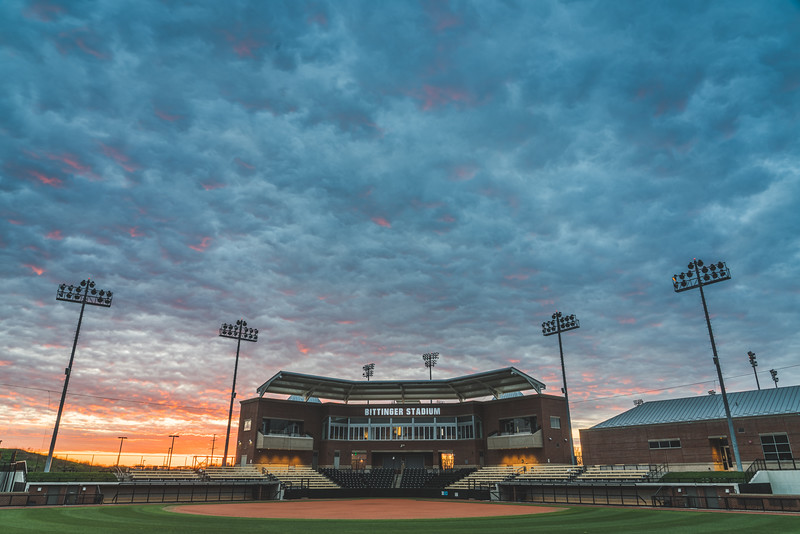 Wednesday night my phone kept sending me notifications of a softball game that I would have photographed. Every now and then one item in my calendar will not stop sending me notifications. It is some sort of a glitch that just happens. This time though it hurt more because it would have been the last softball game of the season. I was out making bird photos, but making softball photos against a rival would have been fun too. As I was finishing up at the bog the next night I saw a small window forming at the bottom of the clouds. I knew that something fun was about to happen so I loaded up my gear and drove down the road to the Purdue Athletic Complex. For sunsets this time of year the softball field seems to be in the perfect spot. The soccer field is great too, but any good angle is behind a locked gate. Here I had two options on the ground to make a photo. Even if for only a short time it was good to be making photos of Bittinger again.

Before the light blew up over Bittinger I made this photo of Alexander Field as well. We are getting close to what would have been senior day for these Boilers too. I loved the sky here, and the sun came out just enough to give me a little light on part of the stadium.

After making the photo from the front of the baseball stadium I knew that the side would look even better. I took off running with my tripod to make the photo. You can see that photo above. From there I ran back to my car in the other direction to get to the softball stadium quicker. Thankfully nobody else was around to see what I was doing. I had the thought that anyone watching the webcams would have a good time watching this fat guy running with photography equipment.

My first thought was to capture this sunset from the air. The photos looked good, but I had the idea of making the photo at the top of this post from the TV platform in centerfield. I could have just had the drone flying above and done both, but I like to have complete focus on the drone when I am flying it. I brought the drone down to make the photo above. I think that it was a good idea. I had the best photo from the air that I was going to get so then I could focus on the ground photo more.