Purdue Takes Down Nebraska In A Great Game

With around four minutes to go in this game Nebraska scored the go ahead touchdown. Purdue was down three points. They just needed to go down the field and either kick a field goal to tie or score a touchdown to win. They had the time, but could they do it? This team did do it. They did it with a fourth string walk on quarterback leading them down the field. A true freshman scored the game winning touchdown on a beautiful play call. This team won because they are a team. The next man up mentality could never be used more. I was so happy for these guys after the game. Injuries have just ravaged them this season. They are playing through those injuries and winning games. A bowl game is still on the table. The road to get there will not be easy, but I believe that this team can do it. 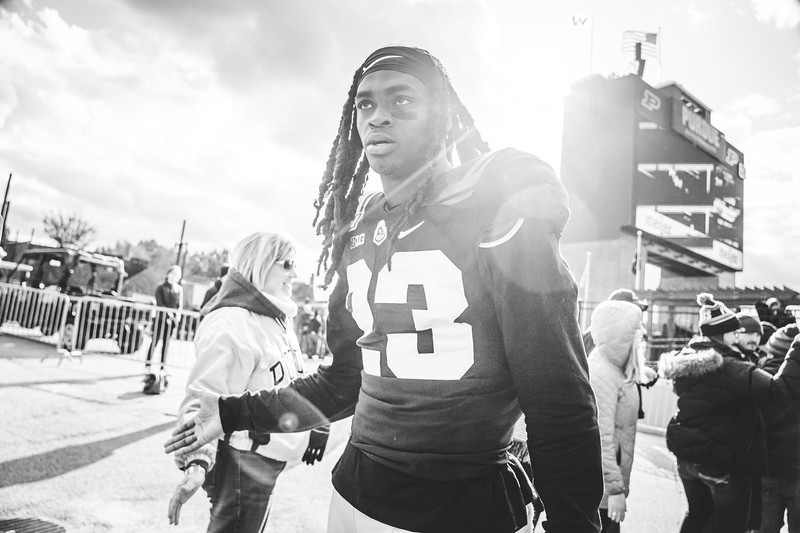 The Future Is So Bright…

Somewhere this weekend I read that the last 16 touchdowns scored by Purdue have all been by freshman. That is just the offensive side of the ball. Right now you see freshman making a difference all over the field for Purdue. The sky is the limit for these guys. The future is bright for this team not just because of the way that they play. You see leadership in this group too. I couldn’t be more excited for Purdue in the future.

I really have not felt like I have had a good game since Vanderbilt to start the season. I decided to change things up a bit and use the 400mm lens and move a lot more than I had been. Maybe it was that move that helped me make some better photos. There is always luck involved, but for the first time since September I was happy with the photos that I turned in.

This was another fun game to make pictures of. Nothing beats game day at Ross Ade Stadium. I love being there. As I write this I think that there is only one more game left on the schedule. It is a good one though against the Hoosiers in a couple of weeks. This is a fun photo crew to be a part of. You can see our whole crews photos here.

Last week was fun. I was able to photograph a few sports and finally got back on the court at Mackey Arena. You can see my favorite photos from last week here.