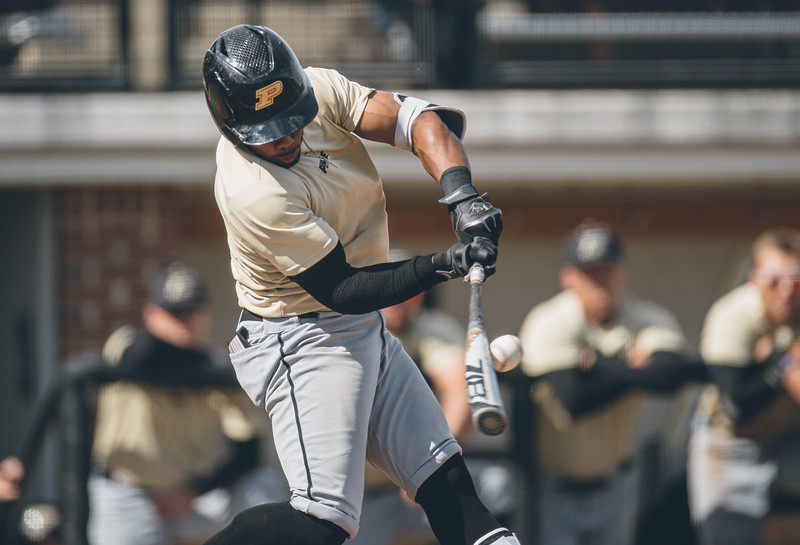 Baseball is a sport that I love. I try and see as much of it as I can, but schedules do not always allow it. After watching some playoff baseball the prior couple of days I decided to get out and photograph a few innings of the Purdue baseball fall game against Heartland College. At this point of the year any game could be my last. With only one more fall ball game left and it being on homecoming weekend I don’t know if I will make it to the game next week. If this was indeed the end it was great to get out and catch one last game.

I had this bright idea before the game. I wanted to make an insane megapixel photo of Alexander Field. I took my new Sony A7R4 to the stadium with that in mind. I set up to try something. I made this 60mp photo of the stadium, and then I tried out the pixel shift mode of the camera. In theory that would have given me an unheard of 240mp photo. I wanted to see just how that would turn out. For some reason though the Sony software that you have to use to stitch the photo together just crashes or shows an error message when I try and stitch the photo. The 60mp file is nice, but I wanted to see what the 240 mp file would look like. Has anyone tried this before with it actually working?

I enjoy playing around with freezing the ball during a game. The trick behind the shot is actually really easy. You have a long lens with a high aperture to start off. Then you pick a point in between you and the pitcher to focus on. When the ball is in that zone you make your photos. Sometimes you have to fine tune the zone a little in order to get the ball placed where you want it. With a camera making 22 images a second this is easier than ever before. I could just concentrate on finding the best place to freeze the ball. When the season starts I want to try and get the ball a little bigger with the logo on it. Heck I may try this idea if I make it to the game next Friday.

The Pace Of Baseball

I hear a lot of photographers talk about how boring and slow baseball is to photograph. If you know where to look there is always something going on. At times games can bog down a bit, but the slower nature of it allows you as the photographer to change your position to make the best photo of the moment. I really love this sport, and I need to find a way to photograph it more often.

Eight Years Of A Photo A Day

Today marks the eight year anniversary of this blog. I have been blogging since 2006, but the first blog was all about sports. This blog started with a photo of Danny Anthrop running around during a Central Catholic game. From that day for the next 365 I made a photo a day and posted them to this site. A lot has changed in eight years, but I still post at least a photo a day. Now though I don’t have to make the photo on the day of the post. At times it can be rough. What it has done though is it forces me to go out and make photos. That is the best way to learn photography. At one point I thought that I would end this blog at the five year point. I didn’t see the point in it anymore. What I found though was that I still have people reading who started this journey along with me eight years ago. I enjoy the writing and the photography so who knows how long this will last? It is a labor of love that has helped me get to where I am today in many ways. Thank you for following along all of these years.

This is another labor of love for me. For a few years now I have taken my favorite photos each week and put them into one Exposure post. I have changed how I show them over time, but I still enjoy putting these posts together. It is another great way to force myself to go out and make photos. Honestly it doesn’t take all that much to get me out making photos. You can see my favorite photos from last week here.