Every tournament has that game. The one that gets out of hand. Sometimes it is one team that catches fire, and sometimes both do. This game saw both offenses on fire. A Big East Tournament record 30 runs were scored. The ball was flying and so were the records. The home plate umpire must have known this was coming as he banned celebrations outside of the dugout early on in the game. This game proved my point that I have been trying to make for years. Baseball is always trying to find ways to make the games shorter and increase the runs scored. The two concepts really do not go hand in hand. This game took forever to play. The good news is that you always had something to watch as the conditions really were such that anything could happen.

For a couple of innings there was just amazing light on the players. With no clouds in the sky the golden hour light was free to paint itself all over the field. I should have been heading up to the press box to send some photos, but you can’t leave light this good. With players from both teams running the bases all over the place I was sure to get some good photos of both squads. 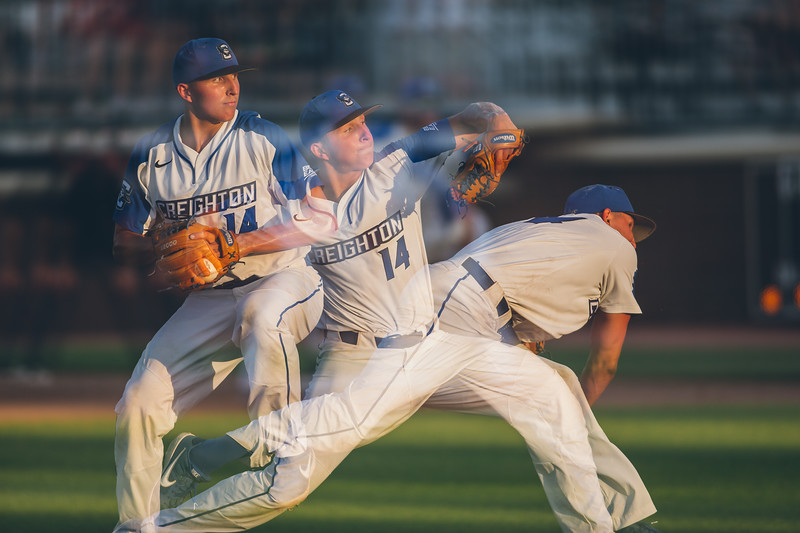 Breaking Out The Multi-Exposure

This is one tool that I have not used much this baseball season. In the past I would over use it so maybe I was compensating the other way here. At some point thought the light and conditions are too perfect not to play around with it. You need a subject moving laterally so the pitching motion is where I go first. I actually used a couple of 3-2 counts to try this with baserunners with some success on the final day of the tournament. The pitching motion is the easiest because it is so predictable though.

This really is a great venue to hold a tournament. It has ample parking, and more importantly for everyone attending everything is free. With the sun setting I ran up to the right field upper deck to make this photo. I wanted to show all of what makes Prasco so cool. The field, the inflatables, and more importantly the ice cream truck in the lower left corner of the photo. I made this bracketed HDR panoramic image with an ice cream cone in my hand. That is another reason why this place is so cool. Free ice cream! 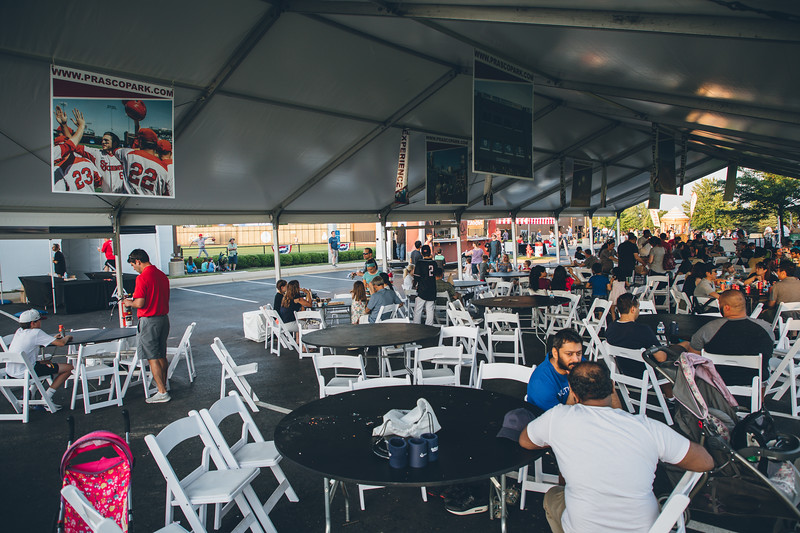 Seeing Your Work Blown Up

Most of my shots I think should be blown up as in destroyed. Every now and then though I really like a few photos. It is always cool to see them blown up big for others to see. The main food tent was filled with my images in a very large format. It took me a while to finally make it down there to see it, but it was worth it. It always fills you with a little pride to know that others like your work.

Last week was a great week. I was able to see some birds to start the week, and then the real great part was the tournament baseball action to finish it off. Tournament baseball always makes for good photos. As I write this I am waiting to see where I am headed next weekend for one more weekend of tournament action. For now though you can view my favorite images from last week here on my Exposure page.