Have A Day David!

Football is played on the field and not on message boards. That is a good thing. David Blough was not given much of a chance on the message boards. On the field he set a Purdue passing record and a Big Ten all purpose yards record. In the second quarter I started keeping track of his passing yards. At one point I thought that if he could just get to halftime at or above 250 he would be doing alright. Of course he smashed that with a late drive down the field. He just kept going until he had the record. I was always someone who liked Curtis Painter. David Blough is a good guy to have the record though. He is just that in real life. A good guy. At a school known for quarterbacks he now has the record for passing yards in a single game. I was in the stadium when Brees set the single game record. A photo from that game appeared on the blog just before the first game of the season. I was in Detroit when Curtis Painter passed that record. I was on the field when Blough made it his own. A pretty cool record that David would probably tell you he doesn’t care about because his team didn’t win the game.

Of course with it being just past the one year anniversary of my Purdue run out picture I really wanted to make a special photo of the fireworks that they were having at Ross-Ade Stadium. The day of the game I found out that everything that I had planned on had changed. I got to the game way too early to try and find another location to make my photo. I settled on the spot that you can see below. It really wasn’t what I wanted, and as the fans left after the game my photo fell flat. It was then that I noticed the shot above. At certain times the smoke from the fireworks lit up, and made the fans lining the rim of the stadium stand out. It was my favorite firework shot of the night, and it really had no great firework in it.

One of the coolest moments that I have been a part of as a fan or a photographer happened on Saturday night. With the game on the line a late review of a touchdown was happening. As the review started someone brilliant at Purdue started playing ‘Let It Be’ by the Beatles. At the time I was moving to my spot to photograph the fireworks that would occur in a few minutes. I hurried to my spot after seeing the stadium light up. This was a spontaneous version of the Boiler Ball lights app. At the end of the day the call did not go the Boilers way. It is still mind numbing to me just how you could reverse that call. This was still a fun moment to remember. As I look at the photo now I realize that once I made this I had a cool long exposure option to try, but in the heat of the moment I was just happy to make the photo that I made.

It was military appreciation night so the flag was everywhere. It is a great symbol that I thought was central to the game story. I tried as many ways as I could to work it into my coverage. I searched to try and find big and smalls examples of it. I think that having that mini goal before the game helped me have a better gallery by games end. I really want to try that every week. I need to pick something to key on and try and get a few examples of it. That helps me get away from being focused so much on the game. We will see how it works next week.

It was game three of the 2018 season for Purdue and it was also my third game on this crew. It is really great to be on such a good crew. Working with great creatives is a fantastic thing. It pushes you to be better at what you are doing. That is a big plus. It also makes it easier to cover the game. When I cover games by myself I have to constantly pick the right spot to be in. On this crew I have my spot to be in. If the ball comes my way then I have to be ready for it. If it goes the other way I know that someone very good is there to capture the moment. The end result is better photos for Purdue, and a great gallery every week.

The One That Got Away

No photo over this part of the post? That is because I screwed up big time. Late in the fourth quarter I knew that I needed to run and grab my tripod so that I could make my fireworks photo. I did so as Missouri was heading in the other direction out of reach of my 400mm lens. I got back to my spot just as Purdue was coming towards me. I quickly picked my 400mm lens back up to make some photos. As Isaac Zico was running towards me I had a bead on him. I waited until he was within range and pressed the shutter button. My camera made two photos and quit. I watched in horror as he hurdled a defensive player in the perfect spot for me to have him completely in frame. The only problem is that I had run out of space on my memory card. In my worries about getting the tripod I completely failed on checking the gear that I had in front of me. It cost me a picture that could have been my best of the year. These are the things that haunt photographers. You can make 100 great photos, but it is the one that got away that haunts you. I still feel like I had a decent game, but that photo would have raised my opinion on my take. 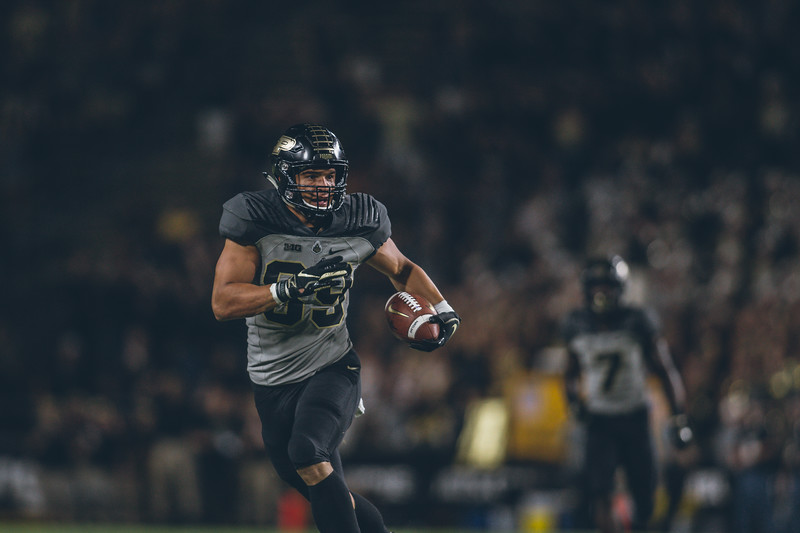 This was another fun week to make some pictures. It was all capped off by a great weekend making pictures at a couple of Purdue sporting events. If you come for the hummingbird photos then you won’t be disappointed. The hummingbirds will be here for a few more weeks at least I hope. You can find my favorite photos from last week here on my Exposure page. I bet that you can tell right away what my favorite photo of the week was. I am biased, but I think that I have a fantastic daughter. She is the cover photo, and my favorite from last week.