2017 was a fun year for me traveling around making sports photos in different venues. I travelled to nine states this year to make sports pictures. Many of those trips make their way into this list as they were memorable venues. This list has moments of action in it, but a lot of it represents my first few moments in a new stadium. I like to get there early and then find a way to show the venue that I am shooting in.

17. This year the Purdue softball stadium finally received a name. It was christened Bittinger Stadium. That seemed to coincide with me getting some time to fly my drone around. I went out to the stadium one day to make a photo of the stadium at sunset. I liked how this turned out. I was really looking forward to making many pictures in this stadium this year, but it just didn’t work out that way. Maybe the new year will bring a few more games here. 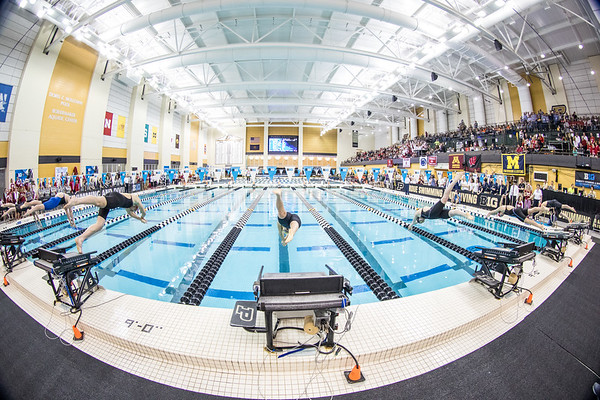 16. For the second straight year I helped cover the Big Ten Swimming and Diving Championships. This time it was the women who made their way to West Lafayette. At the start of a race I had an idea to show off the aquatic center. I used my 8-15mm to get ultra wide to show off quite a bit of the venue.

15. I had a similar thought during the 2017 MVC Track and Field Championships in Cedar Falls, Iowa. Thirteen years prior I saw a spring football game in this venue when I lived in Iowa. It was cool to come back and shoot there for Indiana State. I wanted to show just how cool this building was so I broke out the 8-15mm lens again. It was a long distance race so I had plenty of time to change lenses and find my composition. 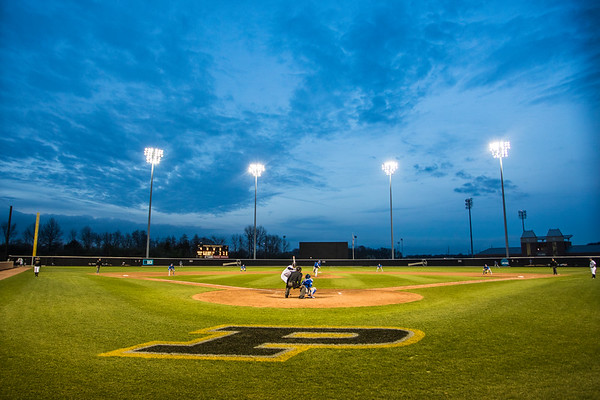 14. I like this photo for what it means in many ways. It is a blue hour photo of an Indiana State pitcher throwing to a Purdue batter. The top of the photo is blue and the bottom has the yellowish tint from the lights. I used to shoot for the gold team (Purdue), but now I shoot much more for the blue team (Indiana State). My past and my present all in one very cool looking picture.

13. Speaking of the past Purdue did a fantastic job of celebrating the 50th anniversary of Mackey Arena last year. They took the traditional opening and amped it up quite a bit. When the floor came to life and dropped away I was immediately blown away. Without any knowledge prior to the event I was caught off guard. I raced up to a higher position to make a few photos of the show. This one just at the end of introductions was my favorite. The basketball experience at Purdue has grown by leaps and bounds since I last sat in the stands. It is amazing just how far things have come in such a short time. Mackey will show up again on this countdown. 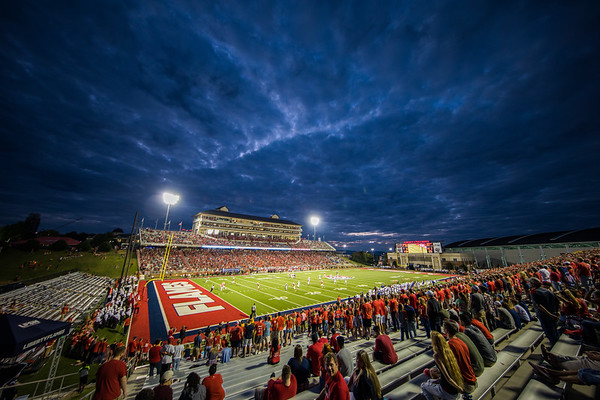 12. One thing that shocked me when the team bus pulled up to the facilities at Liberty was just how well done they all were. They really packed everything in on their campus, but it is all much better stuff than a school their size normally would have. Before the game I made my customary empty stadium shots. They were okay, but nothing too fancy. They probably would not have made the countdown. As the first half was ending Liberty had the ball, and I had a hunch. I thought that Liberty might score and unleash their fireworks display that they shoot off after each score. I moved up to a spot to capture that with the amazing blue sky. Luckily for my team they did not score, but I did make this great photo of that stadium and sky. 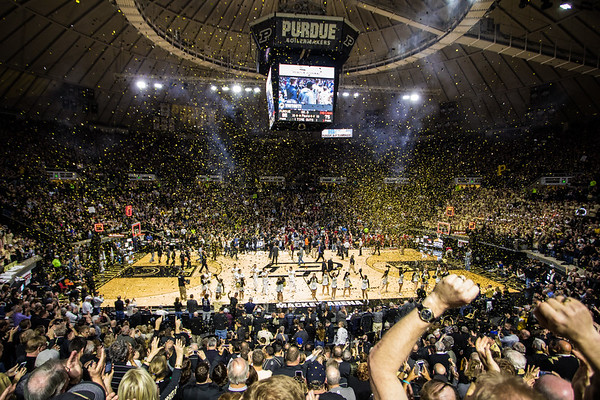 11. This is not my best picture of Mackey Arena. That is why this is titled my favorite photos of 2017. This photo was made just after Purdue won the 2017 Big Ten Title. Confetti was coming down from the rafters and to me that makes the photo. You shouldn’t be personally invested in your subjects, but why not here? I was not shooting for anyone so I could get involved in my photos that day. What a moment for a team that deserved it so much. I would like to take what I learned from making this photo and improve on it this year.

10. This year I had a shorter stay in St. Louis covering the MVC Basketball Tournament. My team was out on Thursday so I made my way home on Friday. This year I plan on spending a lot more time in St. Louis. Before my games I had some fun making photos outside of the stadium with the different statues. The glass really helped me blur the line from the sky to the building. Here Brett Hull celebrates one of his many great NHL moments. 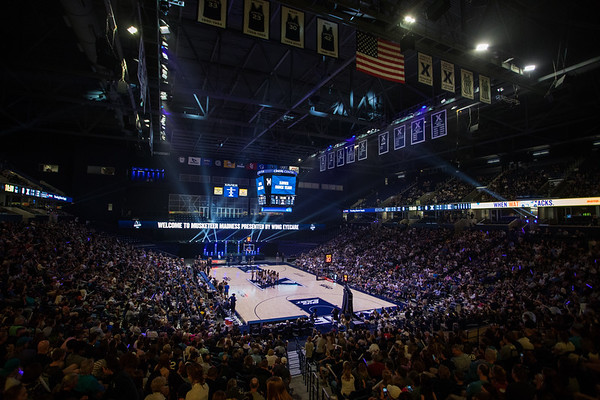 9. For the first time last year I covered an event in the Cintas Center. It is a great venue to watch a basketball game in. This year I will cover an actual game there which should be awesome. The crowd for Musketeer Madness was loud. I can imagine what a gameday crowd will sound like. 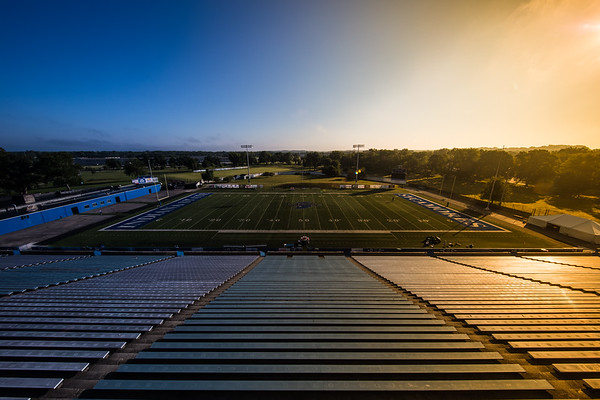 8. Before an early season Indiana State football practice I ran up to the press box to make a photo of the sun as it was rising. I liked the way that its light was hitting just part of the field. It was the first year of the Curt Mallory era so I had ideas of the dawn of the program going through my head. I liked the way that this turned out so it makes the top ten. 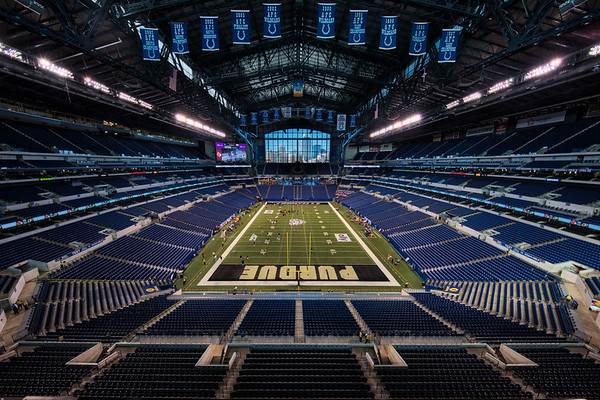 7. I have shot games in Lucas Oil Stadium before, but for some reason this one to start the season with Purdue felt like the biggest one. Before the game started I made my way around the stadium with my friend Tom Crockett to make some photos of the stadium nearly empty. This view with the skyline showing through the window was my favorite.

6. This year I crossed an item off of my nonexistent bucket list. I use the term as it shows that it was something that I have wanted to do for a long time. I saw a game in Neyland Stadium. This was my empty stadium shot made a few hours before the game. I went with the early crew to the stadium so I had plenty of time to make photos before anyone made their way onto the field. I should have gone up top during the game to make a picture, but I didn’t want to miss any moments by my team on the field. It was a big game for them. It is one of the downsides of being a one man band.

5. Here is another example of me getting somewhere way too early. I couldn’t sleep the night before shooting a race at the Indianapolis Motor Speedway. Instead of just laying in bed I went to the speedway early to capture the sunrise. I parked at the credential building where I would need to be anyway and walked over to this entrance. Of course the great sunrise did not happen, but this blue hour shot was pretty cool. 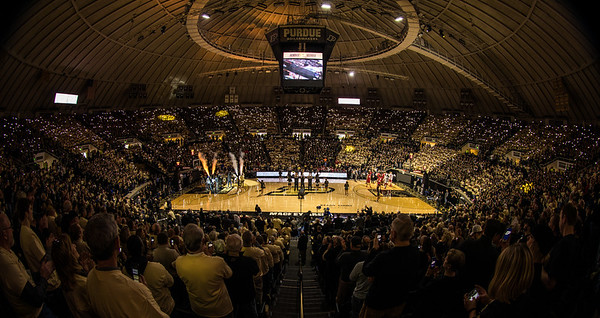 4. Three of the last four shots are of Purdue venues. That is crazy since I don’t really shoot here. It is where I went to school though so I like to make images there when I have the time. Here is a shot that I made during the annual t-shirt game. This is one of the great things to come out of the last few years. The stadium has a pattern to it which is always great. Add to that the awesome new intro for the fans and you have a picture that anyone can make. I can’t wait to see what they come up with for the t-shirt design this year. 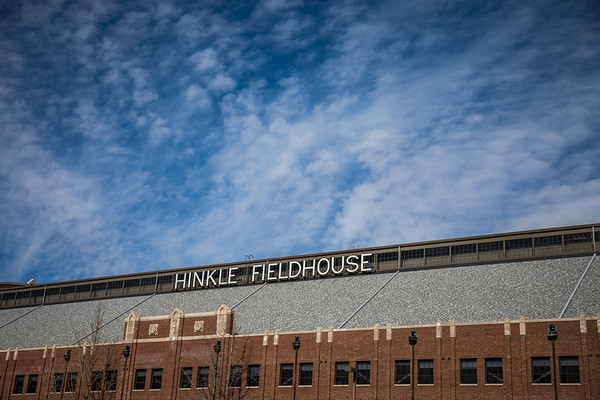 3. Hinkle Fieldhouse is a great venue to make sports pictures in. Here on a cold day I saw a great sky over the stadium as I pulled up to it. I got my camera out of my bag to make this image. I love the dead space here along with the classic roofline of the stadium. It is a similar concept to my Fenway Park photo from last years countdown. 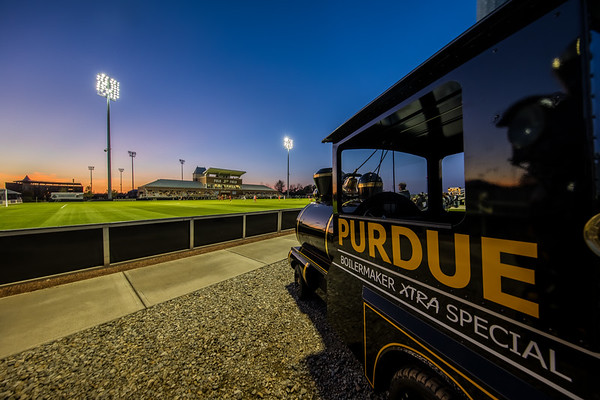 2. This was a photo that evolved over an hour and a half or so. Just before the game I saw a great sky overhead. If the sun had set then it would have been an amazing sunset. With that in mind I made my way to Folk Field. Of course the clouds moved out, and I didn’t know what I would do. I decided to try this shot with the new Boilermaker Xtra Special. I liked the way that it turned out, and it quickly became one of my favorites from the moment I made it.

So there were my seventeen favorite photos of stadiums from this past year. Overall I am very happy with what I was able to produce over the course of the year. I don’t know if I beat my photos from 2016 though. I shot some pretty cool venues in 2016, and I was able to make some photos that I really liked. Here is that last from 2016. What do you think? I think that no matter what I have some room to grow this year. The fun will be trying to make eighteen pictures worthy of this countdown at the end of the year.