My Sixteen Favorite Stadium Shots of 2016

This was a fun year. I was able to shoot in some pretty cool stadiums, and during some pretty cool times to do it. This countdown consists of my favorite stadium shots of the year. They are the ones that I like the most from this year. I have many photos of stadiums at Purdue that I like, and I could probably fill a countdown with them. For this one I wanted to reach out a little and show some of the cool locations that I shot in this year. 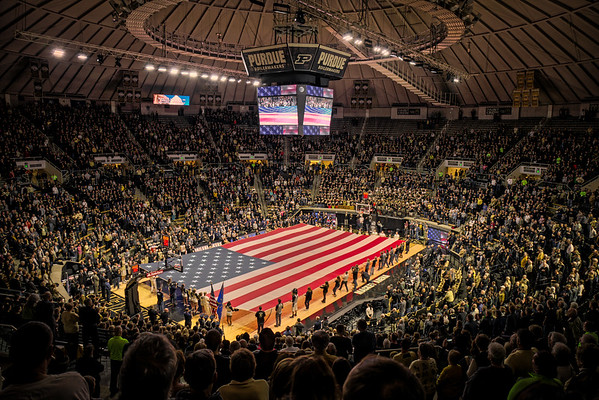 16. Of course the countdown will start with Mackey Arena. I love this arena, and I have made many photos of it during this past year. Some of them you have seen, and some of them have not made their way onto the blog yet. This is a great place to shoot, and putting a flag across the entire court makes for a great photo.

15. This year I was finally able to see a game in the Compton Family Ice Arena. When I lived up north I attended many Notre Dame hockey games at the Joyce ACC, but I had yet to see a game in the new arena. Luckily a chance to shoot for Northeastern gave me the excuse to head up there. It is a very cool arena that is meant for hockey. I would love to see something like this at Purdue someday, but I am not holding my breath for that.

14. One of the highlights of the year by far was photographing the NCAA Women’s Final Four. Banker’s Life Fieldhouse is a great place to shoot basketball, and it also makes a great backdrop. Here I love how the stadium looks as the confetti rains down on the Connecticut Huskies after they won the NCAA title this past April. This was part of a very special three days for me. I was able to check a couple of things off of my list as I shot all of the Final Four games as well as the MLB game at Victory Field.

13. Speaking of Victory Field, here is one of my favorite photos from this past summer. The cotton candy sky with the cotton candy vender in the foreground made this a different image for me. I thought that I would have many more photos from the stadium this past summer, but broken promises got in the way of that. That is too bad as it makes for a good backdrop for photos. 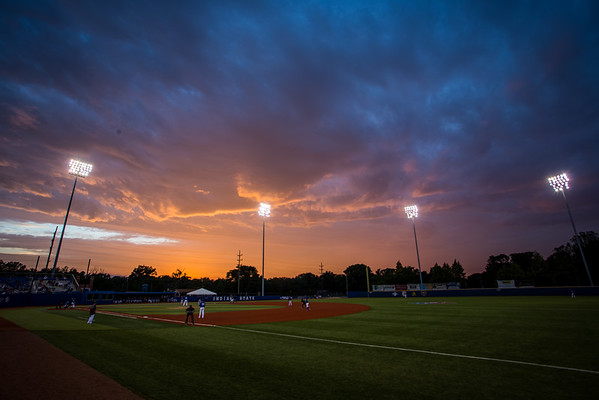 12. After the deal in Indy fell through I had some free time on my hands. That was quickly filled with the MVC baseball tournament in Terre Haute. This was a very fun few days with some great baseball to photograph. One night as the sun went down I quit shooting the action entirely for a couple of innings. If something came up I could have shot it, but I was trying to find a way to capture the great sunset that was happening over the field. It was a special moment during a great week of photography.

11. This photo makes the countdown for a couple of reasons. The first is that I love the way that they compensate for smaller crowds at the arena at Missouri. The banners make for a cool backdrop, and they leave no doubt where the photos were made. The second reason that this makes the countdown is because of how hard the photo was to get. For some reason the security would not let the photographers up into the stands. I saw fellow photographers across the country shooting the same tournament from up high, but for some reason not in Missouri. As I was making this photo a member of security was walking towards me to stop me from ‘breaking the rules’. Because of her great power she felt the need to hit the front element of my lens with her walkie talkie. When you cover an event you need the wide shot to show a sense of place. Apparently they are not proud of their arena in Missouri.

10. One SEC school that was proud of their stadium was Vanderbilt. They have a great stadium in Hawkins Field that made for a great backdrop for the NCAA Tournament. this was a somber weekend in Nashville because of the loss of a Vanderbilt player just before the start of the tournament. I loved the old school look of this stadium, and I think that this photo shows a little bit of that. The old brick tunnel leads right into the stadium where you can see the large green wall in left field. This was part of my second straight weekend shooting some great tournament baseball. I hope that I have an opportunity to do the same every year. 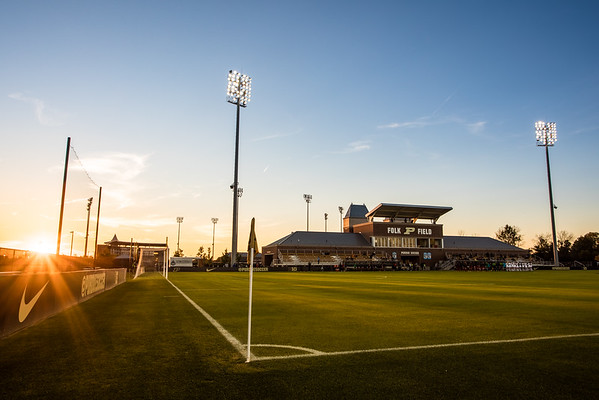 9. This is not a new stadium, but it had a new name this year as it was christened Folk Field. I went down to the field one night because the light was very good. I wanted to make some interesting pregame photos, but I also had this shot of the stadium with the new name in mind. I need to shoot a lot more soccer next season.

8. Earlier I mentioned the Indy Indians ordeal. I by no means am complaining about it. It was something that really shaped my year. With that deal gone I was free to photograph some good baseball. Some of those venues have already shown up on the countdown. This is another great opportunity that opened up for me. During the home run derby at the 2016 Prospect League All Star game the storm clouds made for a great sunset. I made this pano of Municipal Stadium during that great sunset. This is a great stadium that I look forward to shooting in again next summer.

7. Baseball really did take up my summer this year. In August I shot several days of the Colt World Series here in Lafayette. Loeb Stadium is built in such a way that the late day sun just bathes the field as it goes down. You get a little extra golden hour without the high walls and stands down the lines. I made this photo early in the week as the beautiful sun was making its way down.

6. Sometimes the day is so perfect that you have to make a wide shot. That was the case at the Purdue Softball Complex this past spring. I was not planning on making this photo, but the clouds said otherwise. I love the new baseball and softball stadiums at Purdue. Next year I need to get out and show just how great they are.

5. I made this shot of Busch Stadium in St. Louis while I was shooting another event. I set my GoPro up in the window of my hotel to capture the sunset over Busch Stadium. I was down the road shooting the MVC Basketball Tournament as the sun was going down. I love making images in two places at one time. During my downtime I had a great time learning more about the great history of the St. Louis Cardinals in their museum. They have really made a great place to visit all year round here with the upgrades. This is how baseball should be done. In a couple of days they will be playing a hockey game inside of this stadium.

4. Here is one more time when the clouds dictated that I make a panoramic photo. My first baseball game of the season was up at Notre Dame as they opened their home schedule on St. Patricks Day. It was a beautiful day for baseball, and I wanted to show that. You don’t get skies like this very often on opening day. Here I was very lucky. 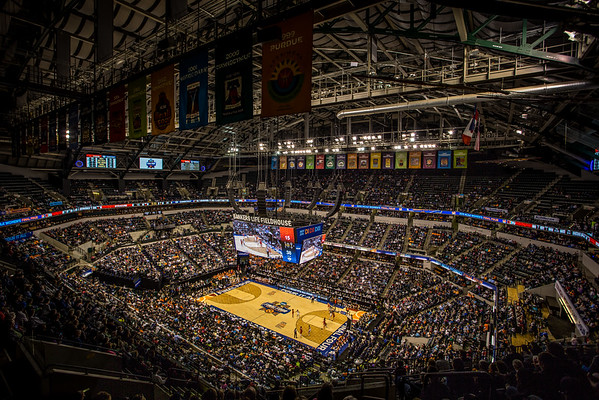 3. My team did not make the final game for the National Championship this past spring. That meant that I had a pass, but no team to shoot for. I decided to try and make some interesting images that I normally would not be able to make. I did some panning, some photos showing the blurred players, and some ultra wide photos of the stadium. I purposely went up above the Purdue National Title banner to make this photo. There is something about it that I have liked since I made it.

2. This is the one stadium shot on this countdown where I was at strictly as a fan. This year I was finally able to visit Fenway Park for the first time. I don’t know why I liked this photo so much, but I really do. It shows the old bits of the stadium off so well. It was amazing being in there, and realizing how much history had happened inside those walls. I need to go back when there is a game going on to make some photos of the stadium with fans in it.