Going For a Fountain Run on Campus

One thing that I never really did while on campus was to go on a fountain run. I think I may have run through them a time or two, but it was never an planned event. Now that I live near Purdue again, and I have kids we find ourselves on campus quite a bit having fun in the fountains. The pool is fun, but the fountain is a nice change of pace. It is also nice to get out and walk campus again as well. Right now campus seems to be nearly shut down with construction. If you weave your way around enough of it though you can play in a couple of cool fountains. I hope that someday both kids will bring their kids here as well to enjoy this great campus. 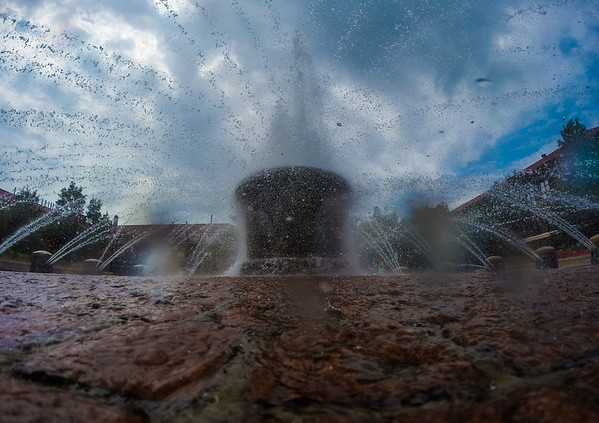 Having Fun While the Kids Play

Part of the fun for me on these fountain runs is going through the fountains with the kids. I also usually spend a few minutes making photos each time. On this particular trip I used both my GoPro and my Canon 5D Mark IV. The photo at the top of the post was made at the engineering fountain with my 5D Mark IV, my Canon 17-40mm lens, and my Lee Big Stopper. I don’t break out the big stopper often, but I usually like the results when I do. The big stopper is a 10 stop neutral density filter that allows me to have a 15 second exposure in the middle of the day. That allowed the fast moving clouds to blur a little more making something a little more interesting than the normal middle of the day shot. At the Loeb Fountain I used the GoPro to make some videos of the kids inside of the fountain, but I also made some photos from inside of the water jets. It is a shot that I would like to get with my dSLR, but the GoPro is waterproof so it gets the job. When I have both kids in the summer I can start to feel like I am not being creative. Trips like this one allow me to get a little creative while still having fun with the kids.