Over the last few years I have really come to love photographing softball. The sport is fast, and it keeps you on your toes. There are obvious similarities to baseball which I love to photograph, but it really is much different to photograph. I always say that I need to get out and photograph the sport more, but that doesn’t always happen for me. I always come away with photos I really like from softball games.

17. The countdown starts off with a moment. That is why I do this. After a tough week for the Indiana State softball team they needed to have a fun game. A late game comeback against a very good Northern Iowa team was just that. Early in the comeback I loved this great moment after a run was scored. I love the look here as it really shows just how much fun sports can be.

16. I love hanging out on the field prior to the game. You can get little moments that you don’t have access to get during the game. Here the Purdue softball team is very loose just before a game early in the season. I love the way that the team plays loose. You can see some of that here. It is just a moment that I was happy to capture.

15. As I said in the opening there are ways that softball varies from baseball as far as photography goes. One way is that the behind the batter angle does not always work with every pitcher. Some motions though works very well. Here is one of those times. I love putting elements both in front and behind the pitcher out of focus.

14. This photo is here for a couple of reasons. It is not the best, most technically sound photo that I made all year. It was one with the interim Indiana State coach in it though. She did not like a call on the field, and was letting the umpire know about it. Her senior shortstop walking away covering her face as she laughed is what made the photo. Shortly after this photo was made the rains came and the game was called. The team was around me as I was sending the photos out, and they loved this one. That interaction seared the photo into my mind, and is the reason it is on the countdown. 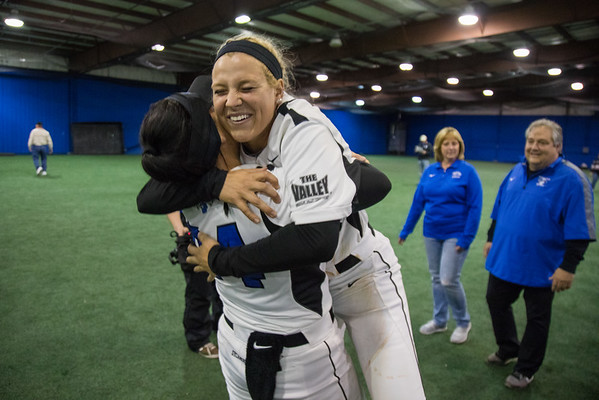 13. With senior day rained out Indiana State did something very cool. They moved the senior ceremony indoors so that the seniors could get a proper send off. This year was a tough one for the team, and the staff did not want the seniors to get short changed. They were able to have the full senior day experience as the skies continued to pour down rain outside. The emotion was still there as you can see above. I say it a lot, but this is why I do this. To be able to capture these moments forever is an amazing thing.

12. I have a plan that I call the best photo policy. When I am shooting a game I will make the best photo that I can. Here at a Purdue game the Nebraska hitter led off with a home run. As Alyvia Simmons came home after the home run her team lifted her up. It was a cool moment that I made a point to capture. At the time Purdue was not too happy so there were no photos there. This was the photo at the moment so I made it. I am glad that I did, and it makes the countdown.

11. Maya Hughes is a fun player to watch. Her speed changes the game. When she is on base my camera is on her. I apologize to the players that have batted in the two hole over the years as I tend to not get my batting shots of them. Maya usually is creating some sort of havoc out there so I am on her. Here she is off the ground as she runs to first base. The bat lies behind her, and the dirt is being kicked up from her left foot. This was a photo that I really liked for all of those reasons.

10. One standout for the Indiana State softball team this past year was freshman Della Gher. She set save records with her performance on the season. She was a stopper that would shut the door on opponents, and I had not seen her play until the final weekend of the season. She came in to save the game, and I immediately noticed her great wind up. I spent the inning working the angles as best that I could to get the shot that I wanted. This is that shot.

9. Sometimes things just work out for you. Here my position allowed me to capture Maya Hughes after a triple. She was very pleased with the hit, and the reception from the dugout. She looked over and smiled. I captured the moment, and as I did I was thrilled to see the Purdue logo in the background. I did not move to my position to put that P back there. The odds of needing it at third were slim to none. It did come into play though, and that is a great thing.

8. During the first game of the season Purdue outfielder Kaylah Hampton had a rough start to the game in the field. A couple of misplayed balls in left field had her with her head down at one point. She did not let that bother her, and when her next at bat came up she hit a bomb to spark a Purdue comeback. Her team was thrilled for her, and the mobbed her at the plate. She gave a little jump onto the plate to score the run, and a nice picture was made. It was a cool moment from the season.

7. I made this picture prior to my first Purdue softball game shooting for the school this year. I was on the field making some photos, one of which has already appeared on the countdown. I saw this scene from the side, and I knew if I could get high enough I could make a cool photo. I was lucky enough to do so, and in the process I found a new angle to photograph the action that I used later in the season.

6. This is one of those photos where everything just seems to come together. You have the nice stroke of the player, the blond hair flying from under the helmet, and the pose. It was a cool moment that I liked as soon as I saw it on the back of my camera. Something just really works here. At a stadium where I struggle to find good angles I had one here that I really liked. 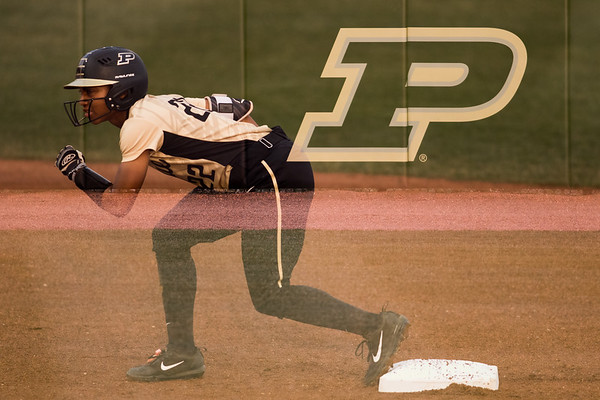 5. I have been talking about photos just coming together through a bit of luck over the past few photos. Here is one where I put the elements in myself. During the first game of the season I was not there shooting for anyone. I went out to my car to get my 400mm lens and my 7D Mark II. That combo would allow me to try some interesting close ups. While doing that I decided to try and put some multi exposures together in a new way. Here I kept using the P on the outfield wall in with Maya Hughes on second base. This is something that is fairly new to me, but I liked the initial results. I think it is something that I need to work on to get it perfect for sure.

4. During the last homestead of the season I kept moving in line with first base every time there was a runner on first. I wanted to capture a double play head on. There are many things that can make a shot not look good even if the double play happens. Here though you have the fielder with a nice gesture, the runner in the shot, and the top of the other runners head in the frame as well. I like how this photo turned out even if the double play did not happen.

3. Maya Hughes and Kristen Hoppmen are always together in the batting order. Here they came together on the field. I think that even though this isn’t a great moment for Purdue I like the fact that both players had just hit here, and the left fielder is already wincing. Kristen made the catch so it was an out even if it was a painful out.

2. Earlier I talked about the emotion during the series against Northern Iowa. The Sycamores were coming off a rough week with their coach being fired. There had to be a lot of mixed emotions going through the team, but they seemed to just want to enjoy playing the game. Here Shaye Barton scores and is pumped as Indiana State pulled ahead of Northern Iowa. It was a great late game comeback that I was lucky enough to be in the right spot to capture. You have to shoot through a net here so everyone has to be in just the right spot to make this work. It worked well here enough for me to make one of my favorite shots of the year.