My Favorite Sixteen Volleyball Photos of 2016

As the NCAA Final Four begins tonight I thought that it was a good time to look back at an awesome 2016 for me. This was a great year for me in volleyball. I shot many more matches than I ever have, and I really started to get the feel for the sport. Instead of guessing all of the time I was anticipating the action. That makes a huge difference when play happens as fast as it does in volleyball. This season was about new beginnings for me. I shot my first games for Xavier and Indiana State. Xavier has turned into a great friendship that has spawned some great images this year. They were a fun team to cover as they played the game hard, but had a lot of fun doing it. This year I also covered Purdue quite a bit. I shot more games for them this year then I ever have before. It started with me shooting their preseason scrimmage for fun, and to get back into the swing of shooting volleyball. It ended for them with their loss to Missouri in the NCAA Tournament. You can view some of my favorite Purdue photos from the season here. It was a fun year watching a bunch of young players mature throughout the year. Next year I say look out for that Purdue team. As with all of these lists they are my favorite shots of the year. I may have made some more technically brilliant photos throughout the season, but these are the photos that I look back on and smile at when it is all said and done. Here are my favorite sixteen photos from this past volleyball season.

16. No coach on the campus of Purdue champions the other sports like Dave Shondell does. During the opening scrimmage with the alums I made this photo of him taking in the action. During a normal match he would never be on this side of the court so I took advantage of that to put the Purdue signage behind him.

15. This year Belin Court was completely redone. It was a great design, but early in the year I was taking advantage of the new court to come up with some reflection photos. I did not know just how long that shine would last so I spent a good deal of the early games playing around with it. This was one of my favorites from that time period.

14. This was one of the last images that I made for Xavier this season. It was a fun year shooting for them, and this moment when they clinched a first round win in the Big East Volleyball tournament was a fun moment. You can see the excitement all around. I had my camera on the ground giving myself a little different perspective.

13. At some point this season I grew tired of lugging my heavy old 400mm lens up and down stairs and around people. I wanted something fast and light for volleyball and wrestling. I found a great deal on a Canon 300mm f/4 lens that was all of that. I made this photo of Purdue senior Fay Adelaja celebrating with her teammates early on in the testing phase of the lens. It was shots like this one that gave the lens a permanent slot in my bag.

12. You can’t argue with the fact that the Boiler Block Party is a big factor in home wins for Purdue. They are a loud section that can get under the opponents skin. I am usually in the wrong place when they point at the server for the opposite team, but here I was in the right place at the right time. They really bring the noise, and make Holloway the tough gym that it is to play in.

11. I had never covered an Indiana State volleyball match before. While I was waiting for the team to come out onto the floor I heard a commotion in their tunnel. I walked in to find them playing a song with anything that they could find in the narrow space. It was a cool moment that looked really fun for them. I will have to explore this a little more next season.

10. The top ten starts with a player that was very good for Purdue this season. Danielle Cuttino really came into her own on the outside this year. Here she is shown with a graceful touch shot over the heads of two Missouri players at the NCAA Tournament this year. This photo also makes the countdown because it was a forbidden photo. For both of the games in Missouri I kept hearing about how the NCAA did not want photographers in off of the floor of the arena. As I looked through my fellow photographers shots from around the country that weekend I saw that most of them were from an upper position. For whatever reason Missouri did not want us up there, and decided to blame the NCAA for it. I managed to sneak up long enough to snag a few photos.

9. As I said in my Purdue countdown normally a photo with just backs and no faces in it would be thrown away. Here though I love the emotion all around, and it tells a story even if you cannot see a face. The crowd in the background is going crazy, and it makes me want to get into Holloway to shoot another game soon.

8. For the past several years I have spent my birthday weekend shooting volleyball. There really is no place I would rather be, and this year was no different. I shot two matches for Washington State on Friday, and two matches for Xavier at Illinois on Saturday. On Sunday I turned forty, and had a good time shooting some Purdue soccer. This was one of my favorite images from that weekend as Washington State just took a big point from Purdue. I love this angle for big games. It tells you a lot that you need to know all in one place. You will see this angle again in this countdown.

7. I normally do not shoot scrimmages. Any time that the game does not count the emotion is not usually there, and that is why I shoot in the first place. This year I was eager to see the new court, and I needed to brush up on my volleyball photography so I made my way down to the Purdue scrimmage. The alums do not want to lose, and the current team does not want to lose to the alums so the emotion is there for the scrimmage. One shot that I wanted to make, and security would not allow during a normal match is the one above. I got down low with the camera on the court near the outside hitter as she went up for a kill. The low angle makes the player looks even more athletic even though Azariah Stahl does not need me to make her look athletic. It is a fun angle that is a little different from what I normally shoot.

6. As I said above my birthday weekend in August was a fun one. This was one of my favorite shots from the games in Champaign. Xavier plays a different kind of volleyball from what I have seen so far. They really have fun playing the game, and that loose style keeps them going. Here they share a moment after a big point, and it is just a fun photo.

5. Here is a photo that is far from the court. Prior to the Purdue game against Indiana at Mackey this year coach Dave Shondell gave a pregame talk to some of the fans. I usually do not shoot this talk, but with the beautiful light coming in, and a photo story to tell for that game I did. That sentence was probably longer than the talk Dave gave that night. This is a fun example of having a little fun during a shoot. I had an idea for a photo, and I went with it.

4. Here is a shot that is easier to make at Butler than at most gyms. The lights at Hinkle Fieldhouse are just on the playing surface so you can really isolate your players from the background. Here Lydia Dimke of Creighton sets a ball during the first match of the Big East Tournament. I went out to check some settings during the first game, and found a former Boiler. She has found success in the Big East becoming the Big East player of the year this season. Last year I enjoyed photographing a match at Purdue where she went up against her sister from South Dakota. She looks like she has found success, and you always wish that for the student-athletes.

3. I said earlier that you would see this angle again. I really try not to sit on it too long, but I like the results too much not to go to it every match for at least a little while. Here the emotion was boiling over as Purdue was in the process of taking down #4 Kansas at Holloway Gymnasium. I went to my go to spot at my media desk, and waiting for a moment. It didn’t take long before this one was given to me. I love the individual reactions here as well as the Kansas players being helped off of the ground. This was part of a very emotional Stacey Clark Inivitational this year where Purdue seemed to be on a mission to keep that trophy at home. I don’t think that anything was going to stop them as they played for Stacey.

2. Speaking of emotion, it doesn’t get any better than this. While in Champaign shooting for Xavier I had a little downtime in between matches. Luckily there was a volleyball game going on so I decided to try something a little different. I went down behind the players with my 400mm lens to capture some emotion. It was a risky proposition as I would be so tight that I would only get the reaction of one player. If a great group celebration happened I would miss it. The good news was that I was not shooting for either team so I could just go for it. At some point after a big point Barbara Dapic turned and yelled to her teammates. It was a great moment, I luckily for me she was the player that was in the best position for me to capture. I was guessing players based on where they were on the court. This was one of my favorite volleyball shots of the year just because it is that jube that we are all always after. 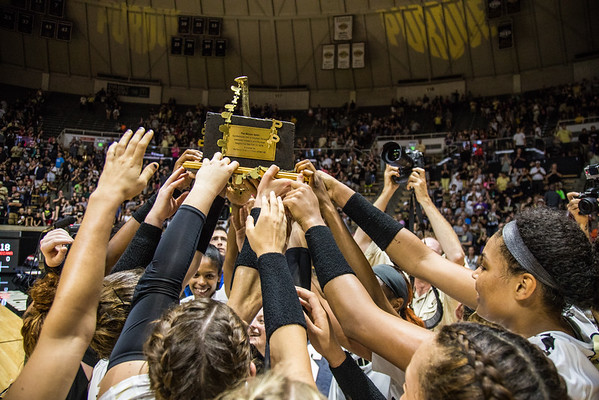 So that is my favorite sixteen volleyball photos from 2016. As I said above it was a fun year for volleyball, and I can’t wait until volleyball starts up again next year. If you want to view more of my favorite photos from 2016 you can click here to do so. I have put together some fun lists as the year has gone on. These lists have a dual purpose. They give me a way to show off some of my favorite work from the year, but it also gives me a chance to look at what I have done. I can see how far I have come in a year, and also just how far I still have to go.