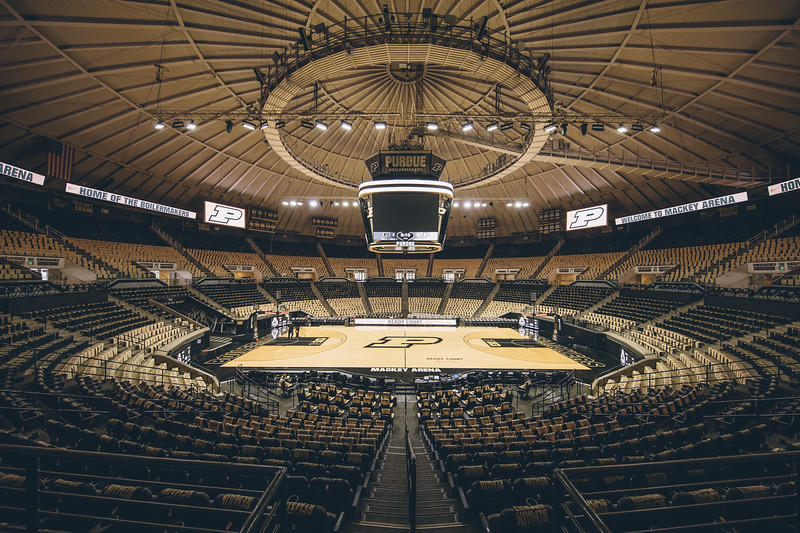 The T-Shirts Are Laid Out

Every year one of the games that I look forward to the most is the t-shirt game at Mackey Arena. It was by pure luck that I was at the first game in 2013. I didn’t have season tickets and if I remember right the game was sold out. I ended up using the tickets that belonged to one of the members of the cradle of quarterbacks. The seat turned out to be a great view of the t-shirt design. Every year since then I have made sure to make it to at least part of the game to make a photo of the design. It is always so well done, and it looks great. This year I have family plans in the afternoon, but I will get to the game to see how the t-shirts look with fans wearing them. It is a great idea, and a

The View From My Old Seat

While I was making these photos I was trying to wait out some people shooting on the court. I decided to go back to my old seat from when I had season tickets. It was cool to sit there again. I can still remember the Baby Boilers knocking off Wisconsin from that seat. Being a part of the great atmosphere that was the West Virginia New Year’s game. The unreal crowd the day that college gameday game to West Lafayette. All of these were great times from that seat. Now I have a much better seat. Whenever I think of wide angle shots though my mind goes to this seat right above one of the entrances into the stadium. I made so many wide shots from there over the years that you would think I would find a different spot. It just seems to work from there though.

Above is a 21 shot panoramic of the stadium from as high up as I could go at center court. With my 11-24mm lens I took seven three shot brackets going from left to right. Inside of Lightroom I took all of the brackets and merged them into one image with a much better dynamic range. I then edited the center shot of the court to how I wanted it to look, and then applied it to the other images. That is an important step because once you run the pano program in Lightroom you lose all of that dynamic range. After everything looks how I want it to I then run it through the Lightroom pano program. The image was stitched together in no time. In about five minutes I went from 21 separate images to one very cool images of one of my favorite places to be.