Another Year Of Musketeer Madness

Last spring while shooting the Big East baseball tournament I was asked to photograph Musketeer Madness again. I had so much fun last year it was a no-brainer to say yes. Xavier is not the closest place to me. The people there are fantastic though, and the event is a fun one to photograph. Last year was my first year doing it so everything was new. This year I had already made certain photos so I wanted to try something new.

Flying Above The Madness

Part of something new was taking my drone up for a quick spin. Last year I had a big and bulky drone that would not have made sense to carry. With the Mavic Air I had it in my shoulder bag with a couple of extra lenses. It was easy to take straight up for a birds eye view of the event. It is just another way to add another view of the day. 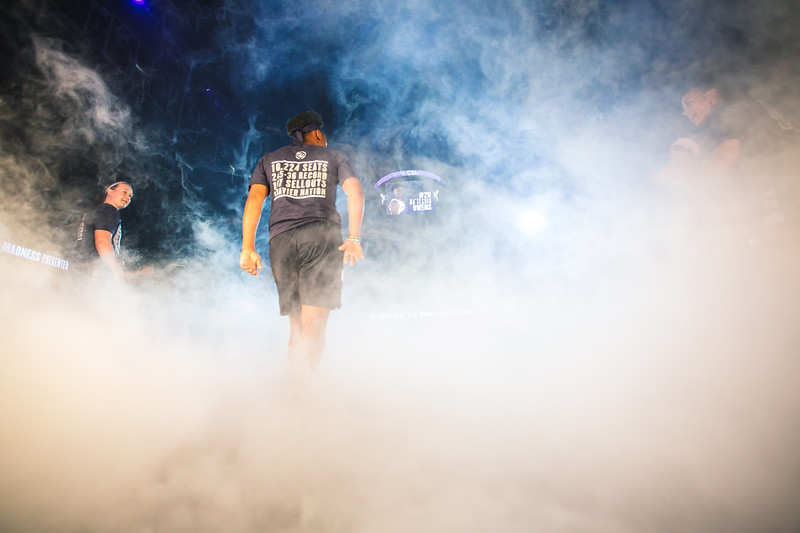 Last year at Madness I made my favorite picture from behind the stage. I decided to really hit that angle hard this year with a remote. I placed it where I thought it would look best, and then went to my spot at the front of the stage. I could now be in two places at once! It worked great for the women’s intros. When it was time for the men I knew that I had a killer shot of Tyrique Jones. You just know when things work out. As the intros were over I went to shut off the Pocket Wizard on my camera. It was already off. Pro Tip: the Pocket Wizard does not use that much power in standby mode. Don’t shut it off in between events to save power. If you do shut it off at least remember to turn it back on.

I have some trouble finding the emotion in practice. That is what I am always trying to get in sports. In a quick ten minute scrimmage that is hard to find. I had fun shooting there, but it will be more fun when I show up later in the year to photograph some actual games in the Cintas Center. I can’t wait to see this place loud and packed.

This was a fun week. I say that every week, and that just proves how lucky I really am. This week was special though. Tomorrow I will get a little more into why I say that. For now you can relive my last week here on my Exposure page.