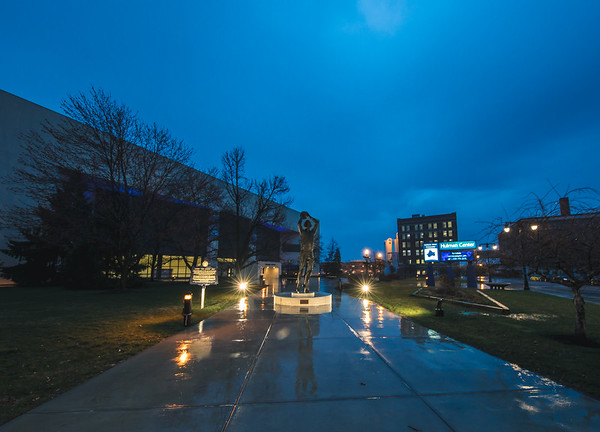 Blue Hour At The Hulman Center

Last night I was back in Terre Haute to photograph the SAMY’S for Indiana State. As I was leaving the Hulman Center I realized that there was a picture to be made. I parked again and grabbed my camera for one last photo on the night. The blue hour on a campus known for their blue had to be cool. The Larry Bird statue out front of the Hulman Center seemed like the obvious choice. I wanted to work this scene more, but the front element of my 11-24mm lens started getting pummeled by rain on the first picture so I could only get a couple in. It still was worth pulling over to make this picture.

This is the second year in a row that I have photographed the SAMY’S. As I said last year it fills me with pride to see my photos being used the way that they are there. What filled me with even more pride was being able to show it all to my daughter. She may only be four, but she wants to go on every photo adventure I go on. This was one that she could attend as it was a fairly easy event. It was fun showing her the people and the places that I call home down in Terre Haute. Someday soon hopefully she can help me out a little more with her camera.