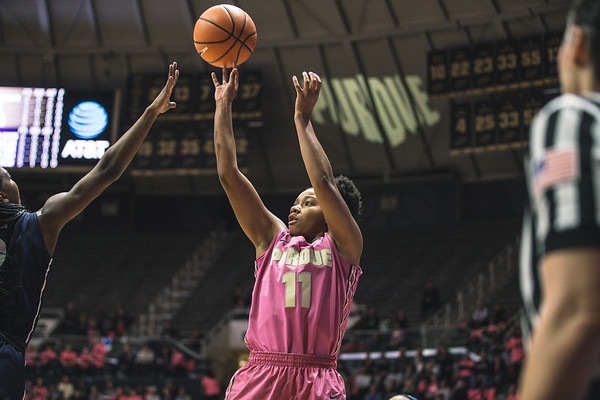 Man I don’t know that I have ever covered a team that had a half as hot as Purdue had yesterday let alone the entire game. The Boilers shot 73.5 percent to set a school record. They were shooting 75% at the half! At the half I wondered if Purdue could keep up at that pace. You don’t often see a team red hot, and then come back out red hot. You just want them to hold the lead. Purdue never really did cool off. That was a performance that I will remember for a while.

While I was at Purdue Ukari Figgs provided many great memories. The National Championship banner that hangs in Mackey Arena was part of her doing while a Boilermaker. One funny story that I don’t tell often is how badly Ukari embarrassed me one day at the co-rec. I would be embarrassed telling the story, but nobody really reads this blog anyway so why not tell it? I thought that it would be a good idea to match up against her at the co-rec just to see what it would be like. What I thought would be fun turned into a clinic for me. She was just having fun, and I was dead serious. She pretty much toyed with me the entire game. Of course her team won quickly so the pain didn’t last too long. She has probably done this to countless people so she would never remember it, but I will never forget it.

More Photos From the Game

I had a great time shooting in Mackey again. I have not shot too many sporting events this year so I thought that I might be a little rusty. I had an okay game. I need to get out and photograph a couple of games this week to get back in the flow. You can view my full gallery from the day by clicking here. It is always fun shooting for Purdue. They are doing some great things right now, and even being a very small part of that feels great. If you want a great example of what they are doing right now check out this gallery from the Indiana game yesterday here. It is fantastic.

Last week was an interesting week. I really struck out looking for owl behavior early in the week. This is the time of the year when I start to go a little crazy. The landscapes don’t look so good because everything is brown. The least the weather could do is snow a little to give everything a cover of white. At the end of the day I have another collection of my favorite images from the past week that you can view here.