My 17 Favorite Photos From the Indiana State Football 2017 Season

This was a fun year with the Indiana State football squad. It was the beginning of the Curt Mallory era, and with a coaching change always comes a renewed enthusiasm across the board. Early on in the season I knew that I would be traveling with the team on a few trips. I was really looking forward to the Tennessee trip. I had booked that one for over a year so it was really something that I was looking forward to. The season did not turn out like anyone thought that it would. With that said it still was a fun one to cover. This was a great group of young men that really were great to me. I am already looking forward to the 2018 season. Here are my favorite photos from the last year. 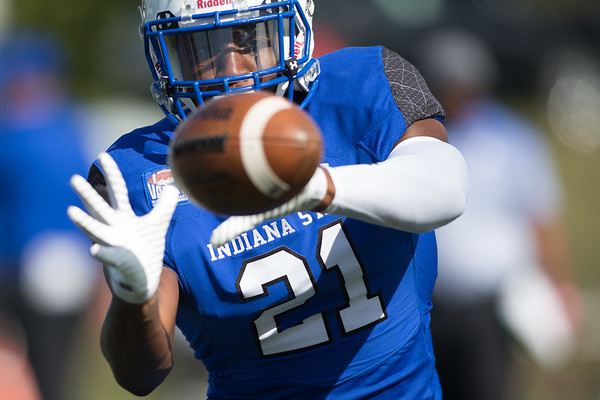 17. I thought that I would start off with a photo from warm ups. I am a huge proponent of shooting warm ups. You can get warmed up along with the players. You can make great photos of players who do not currently see time on the field as well. I love these up close shots that you really can’t get during the game.

16. This season started for me technically in the spring. I went out to the first practice of the Coach Mallory era. There were some cool moments that day, but I have always wanted to photograph the players tackling the donut. When I played I was the tackling dummy. I was glad to see players like me replaced with something else. 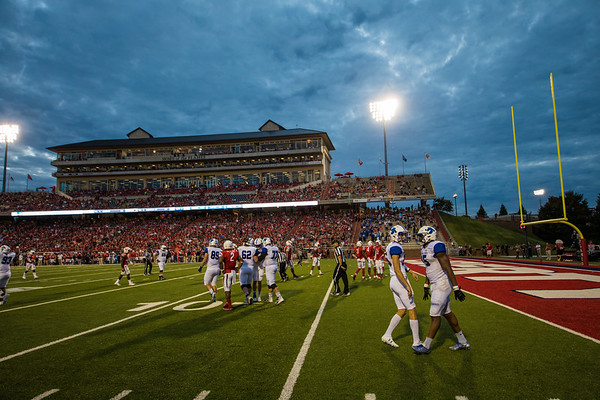 15. Here is a photo that I never thought that I would make. It is the kick holder and the tight end celebrating their touchdown connection. Late in the game at Liberty Jeremy Patterson took the snap in the field goal formation and rolled out to his right. He found Jacquet McClendon in the back of the end zone for a touchdown. It was a moment that I was not expecting, but I had my grab camera ready to capture this moment between the two after the play. 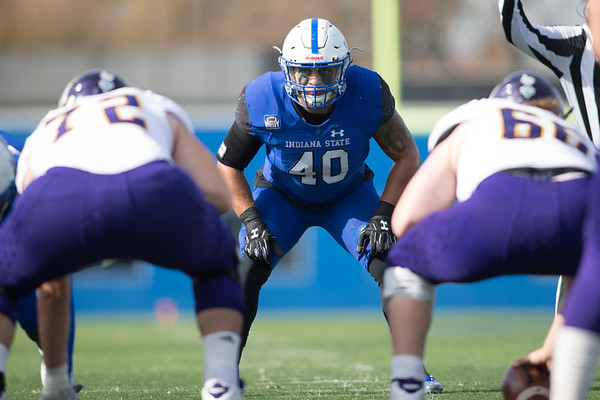 14. On senior day I wanted a good photo of Katrell Moss at his linebacker position. I love the eye black and the intense look that he gets on his face. Here with Western Illinois backed up against their own goal line I was able to get right in there. 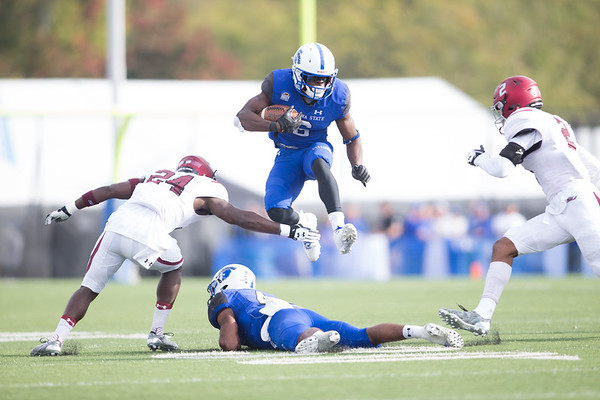 13. One player that has been fun to cover these last few years is Lemonte Booker. It was a photo of Lemonte that was my first football photo in the local newspaper. I have made some interesting photos of him over the years. This is one of my favorites from this year. He really would do whatever it took to get yards for his team, and that translates into great photos. 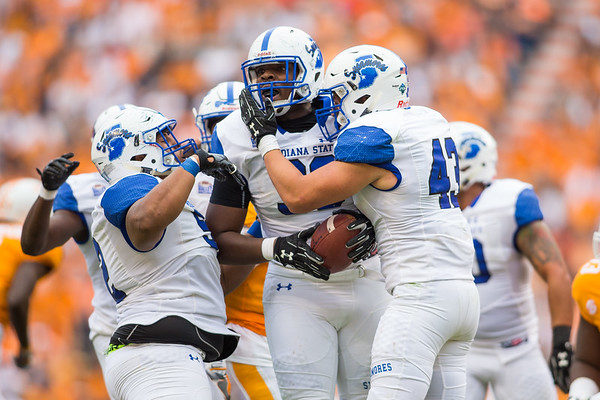 12. I really loved the idea of the all white uniforms against the orange background at Tennessee. Here after a big fumble recovery the defense celebrates. This defense gave me some great photos this year as they were a very expressive group.

11. Here is another photo to illustrate my point. Against Illinois State Norvell McGlaun celebrates a big play for the defense. Norvell was a player that always gave me some great emotion. When I photographed his family on senior day I saw where that emotion came from. He is another player that I will miss photographing.

10. For each game that I photographed I made the captains photo just before they walked out to midfield. This one was by far my favorite as the sky was really in my favor here. I liked these moments as they captured a moment in time. Four badass players ready to meet their opponent. 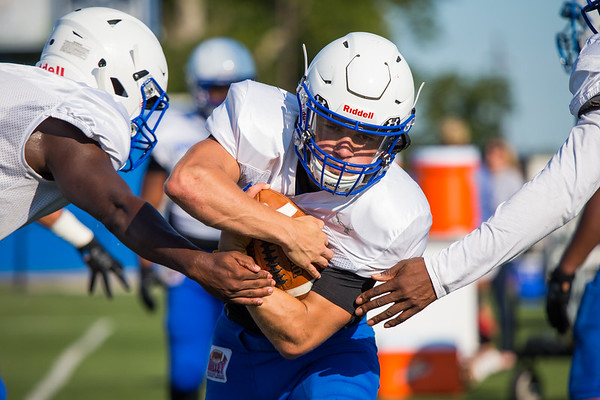 8. One exciting player in camp was Titus McCoy. He was a freshman, but played way above that. He will do great things for Indiana State before it is all said and done. I covered a bit of the fall camp, and this was one of my favorite photos from those warm mornings. 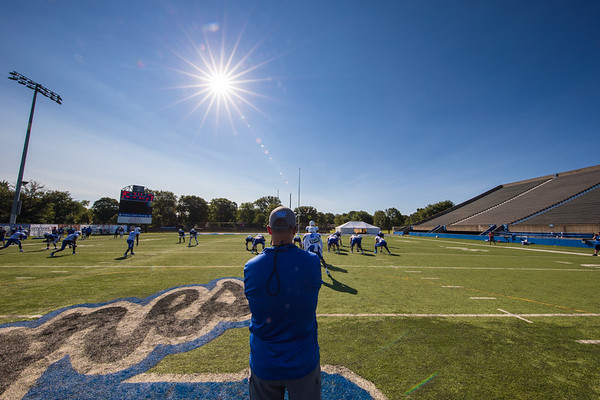 7. This season was about the start of the Curt Mallory era at Indiana State. He has a great staff that just exudes confidence. The results did not come in year one, but you can sense that they will. This entire coaching staff was fun to cover this year. With the off season to prepare and recruit I have no doubt that they will be a force to be dealt with next season. 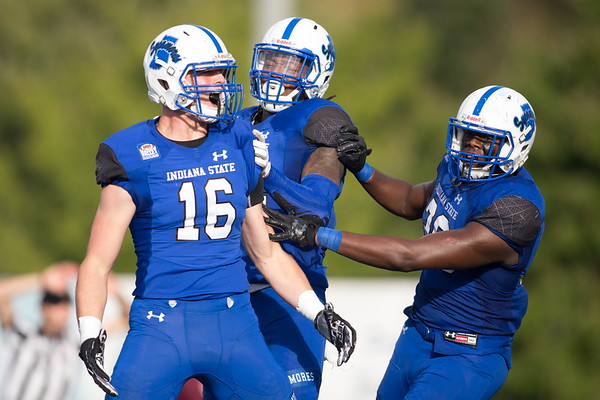 6. What I love about this photo is that it is after a big punt team play. This year most of the punt team focus was on punter Thomas Bouldin. He could really boot the football. Here his punt team makes a great play to stop a returner dead in his tracks. I love capturing these moments as some of the players don’t see the field too much. When they make a big play on special teams it is a big boost for the team. 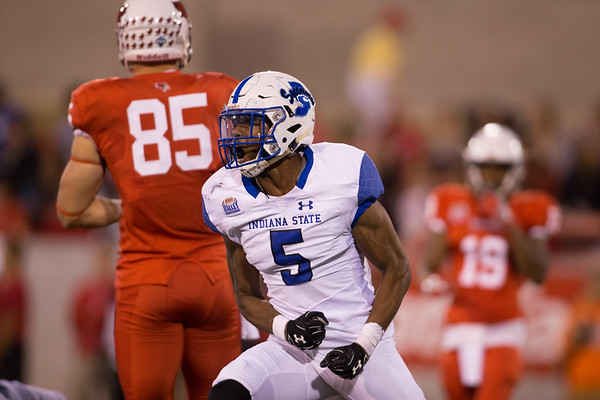 5. More defensive emotion. Here Raymond Clifford celebrates another big play against Illinois State. The rivalry between the two ISU teams is something else. It really takes things up a notch which is great for emotion. I made some great photos during that game just of the pure emotion from the two squads. 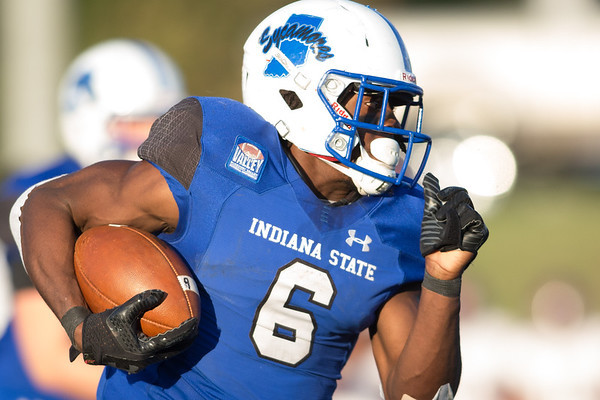 4. Late in the homecoming game I gambled a bit and moved even with the offense. If they had a big play downfield I was going to be in trouble. I was hoping for a good photo of the quarterback or something of the running back. Here things worked out perfectly as Lemonte Booker ran right at me. I was able to make a nice tight action shot of him.

3. At some point during the Liberty game Bob Pugh became ‘Big Play’ Bob Pugh. The reason I talked about having to gamble in the above picture is because of Bob. During that Liberty game I was burned just as bad as the cornerbacks covering Bob as he caught some deep balls. He really became a threat as you can see above. Here he hauls in a bomb early in the homecoming game to put ISU up 7-0. I love the players reaction in the background. 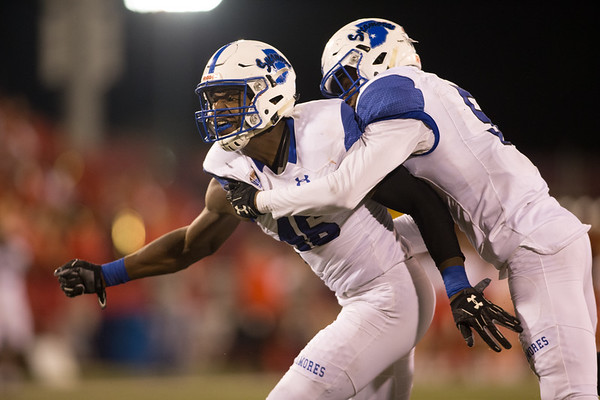 2. More great emotion from the Illinois State game. This team really was full of emotion which is great fun to photograph. One of my favorite players on the defensive side of the ball to key on was Jonas Griffith. He was always giving me something every game. I had to pick between a lot of great photos of him to get to this one. I thought that this summed up his season quite well. 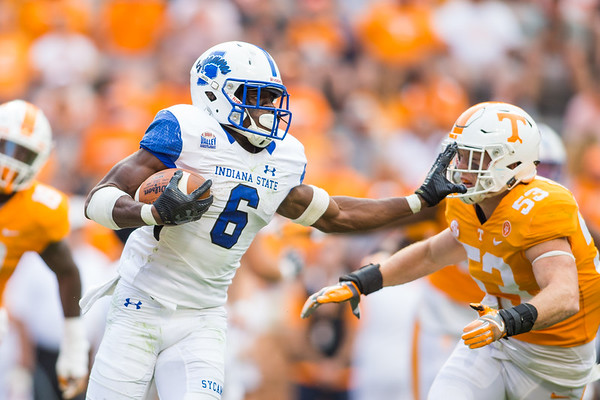