My Favorite 10 Images From the NCAA Baseball Tournament Louisville Regional

For the third straight year I was lucky enough to photograph a NCAA baseball regional. Tournament baseball is so much fun to photograph. For the second straight year I have photographed Xavier as they made their run through the tournament. Both of those years Xavier has made it to the finals, but could not break through. Next year it would be fun to watch them finally get that regional win. It is hard to boil down images from six games into my top 10. As always with these lists the order could change the next time that I rank them. As I went back through my images these were the ten that popped out to me. 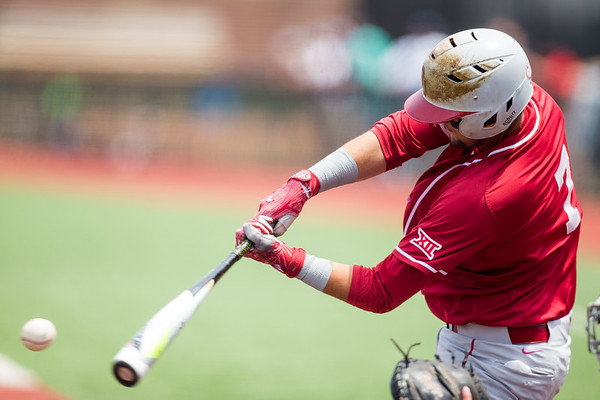 10. I will start the countdown off with a tight shot of Jack Flansburg batting against Xavier. At some point during games I will move to this position to get some fielding shots. When the batter is facing me I will also get a couple of tight shots of them batting with the ball in the frame. I think I like this one so much because of the pine tar on the helmet. There is something about that that made this one pop for me.

9. I did not shoot any baseball for Radford that weekend, but I did make a few photos of them from time to time. Their second baseman Kyle Butler would blow bubbles in between plays at his position. I wanted to show the outfield crowd and the Louisville sign in the background so what better player to place in the foreground. For some reason I am drawn to bubble shots. This one was my favorite of the tournament.

8. Cade Harris of the Oklahoma baseball team would check his bat each time before stepping into the batters box. I made a few shots of this over the three games I covered for the Sooners, but my favorite was this one as the sun was setting. The light was almost like a spotlight on Cade as he went through his batting ritual.

7. The same night as the photo above I made this shot of Oklahoma shortstop Brandon Zaragoza fielding a ground ball. I really liked the way that the light was coming into the photo. I sat on the shortstop for a while hoping a ball would come to him, and I was lucky enough that one did. When you shoot a multi day tournament you hope for little things that change things up a bit. The one night of great light that we had did that for me.

6. I did not shoot any games for Louisville. They have a great staff which will grow by one next fall. When Josh Stowers hit hit three run bomb to give the Cardinals a 3-2 lead over Xavier I had nothing to shoot for Xavier. I panned over to capture this great moment as the Cards rushed out to greet Josh after he crossed home plate. That was a great game full of back and forth moments. 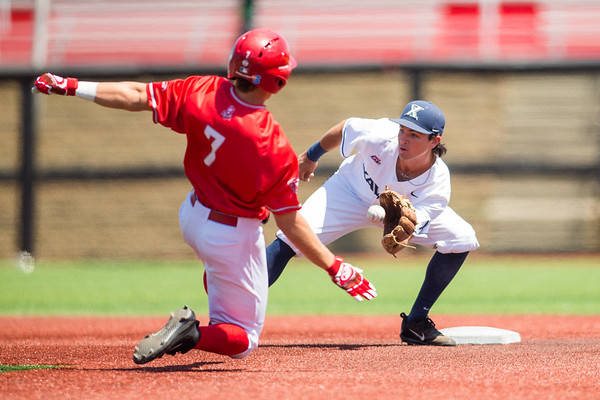 5. These are the shots that I strive for when shooting a play at a base. I want the ball just outside of the fielder’s mitt. This way you can see the motion of the play in its entirety. I was happy to get this one of Xavier shortstop Chris Givin receiving the ball so that he could put the tag on Danny Hrbek of Radford. I have photos of the tag, but heads are down as they often are. Here the face is in just the right spot to make a nice photo.

4. Sometimes you get very lucky. This was one of those time. I moved to the outfield to capture the Xavier pitcher with the full stands and bunting behind him. Just before the pitch Xavier third baseman Rylan Bannon moved into my frame and covered up the pitcher. I kept my focus on the pitcher hoping that Rylan would move. He did not, but he did snag this line drive to his left. I grabbed focus on him just in time to make this photo.

3. I used to hate turf fields. I love the dust and dirt flying on a dirt field. After a while though I realized that turf fields have their own unique ways to show motion. The top layers often come up flying as players slide into bases. Where it is the coolest though is near the plate. The ‘splash’ of turf is fun to capture. On a full swing I don’t often publish the photos as you see that the ball did not go far. A bunt though is the perfect way to showcase the splash of the turf. Here as Mitch Gallagher of Xavier burst you can see that effect.

2. On the second day of the tournament Brandon McKay took his turn to pitch against Oklahoma. He pitched a good game, and there was a buzz around the stadium as he took the mound. The photographers were fighting for position to get a shot of him. I had one held down from the top of the first inning, and multiple photographers tried to stand right in front of me. It is funny how a good player can make someone forget courtesy on the sidelines. I waited it out and made this photo of Brandon. I wanted something that nobody else was making. As he ends his Louisville career this photo makes a little more sense. I have other shots of him pitching from a few different angles, but this one was my favorite. He will be player of the year in many publications so it was a cool photo to make.