One thing that you can expect every week in the Big Ten is the unexpected. A week earlier this same Purdue team did not look very good at Illinois. Fast forward a week and they absolutely handle Michigan State. This is going to be a fun Big Ten season. From what we have seen so far by teams the home team has a decided advantage. I only photograph the home games so hopefully I don’t see another loss for the rest of the year.

Man I love Mackey Arena. Photographing it from a different perspective though is getting hard. I feel like I have done most of the angles. I have been trying to come up with new places to go for my wide photos. When I think of a wide photo of the stadium the view from section 112 is what comes to mind. For years that was where my seat was for men’s basketball. I was in the front row with the entrance to the section below me. That meant that I had an unobstructed view of the court. I never thought that it could get any better. My seat from the floor is quite a bit better, but I still love being in the crowd.

Hanging With The Paint Crew

This is the second game this year where I have been in the Paint Crew for part of the game. I am twice as old as the members of the Paint Crew, but for a little while I feel younger up there. They are so into the game that it is infectious. Photographing the game from up there is real fun. 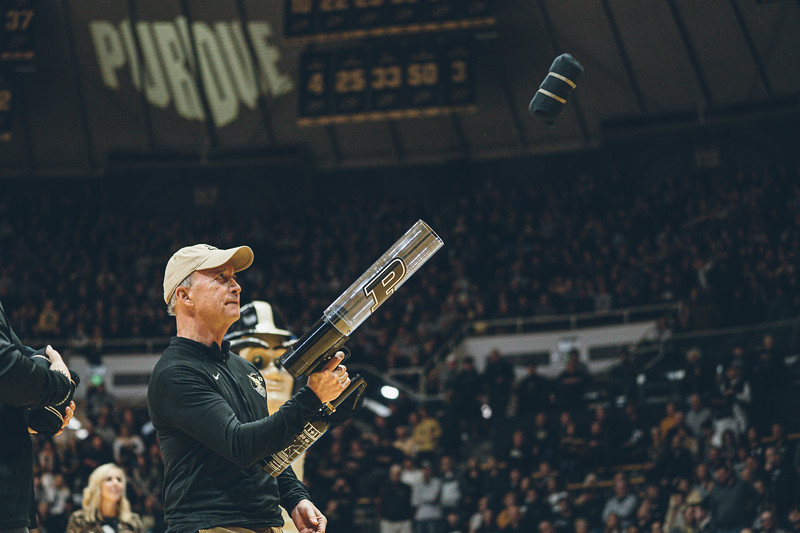 Mitch Daniels Having Some Fun

Before the game started Mitch Daniels was on the floor making some fans happy by shooting t-shirts into the crowd with his very own t-shirt cannon. These are the little moments on gamely that make the galleries a little different from each other.

Here is a link to the Purdue gallery from the game. It is always fun to work with this crew, and have my name on the gallery. The majority of the photos are not mine, but just imagine that all of the good ones are.

Here is a link to my weekly look at my favorite photos of the week. This was a week spent getting back into the swing of things. I was back out at the Celery Bog as well as back in Mackey, Lambert, and Holloway. It is always fun to start filling up my folders for the new year.