I don’t photograph a lot of weddings. They are fun to do, but they can also be a lot of stress. I only get one shot at a lot of moments so I think way too much about ways to capture them. This wedding at Camp Mary Orton was one that I was excited about from the moment I heard about it though. As you will see below it was an action packed weekend that resulted in some photos that I really enjoyed making.

Starting Off At The Rehearsal

I always start off my weekend at the wedding rehearsal. If you read this site then you know that I mainly shoot sports. If you told me that I could see a slowed down run through of the game the day before I photographed it I would be there in a heartbeat. That is what the rehearsal is. It is a great way to think about your plan for where to be on the big day. You can pick up little things that you want to make sure you photograph, and you can make your plans based off of it. It is also a great way to get to know people a little so by the wedding day you are known a little more. This helps you blend in a little bit better. 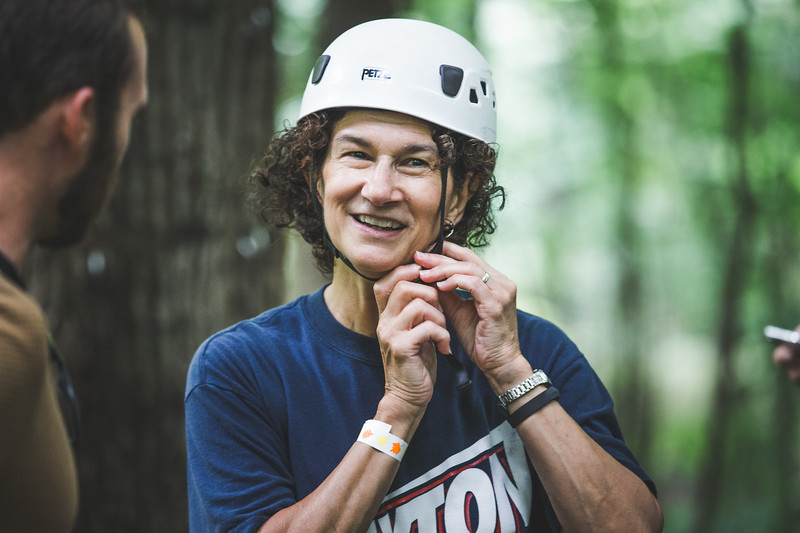 Starting The Day Off With A Day At Camp

This was a fun wedding because of the activities before the actual ceremony. It was truly a day at camp. Some of the things I photographed in the hours leading up to the wedding included: archery, kickball, tug of war, jenga, croquet, and a three legged race. The highlight for many guests though had to be the zip line. I can still hear the words “zip on” in my head. This year I have really seen just how cool the destination wedding is. It is a great way to bring the wedding party together before the ceremony. You don’t have sides at that point, but rather a group that has been together for a couple of days.

When The Gods Smile On You

This was a wedding that would have to be held indoors. As I checked the weather all week it was assured that it would rain on Saturday. It was in the middle of three days of rain, and a 90% chance. As Saturday moved on though the clouds really started to get lighter. Just before the bride left for the venue the sun actually came out. A small window opened that allowed the wedding to happen. After the wedding as we were going through the family photos the rain really looked like it was coming in. We finished up just in time as the rain really started coming down. The good news is that the reception was inside. The sky cleared up just in time for the wedding to happen as it was planned.

I always say that the hard part of the day leads up to the actual wedding. The reception is a place to have some fun. This was a wedding where everyone seemed to have fun at the reception. I love the moments like the first dance. It can be a time when you can really show just how much the two in your photos love each other.

I walked outside to make a photo of the bride and groom inside of the Photo Booth. The blue hour was just ending, and instead of the couple waiting in line I suggested trying a quick photo. I only had my on camera flash with me, but I would try and make it work. I made the photos, and I went back into the reception. I checked my phone and realized that we had just missed a space station pass. As I looked through the blue hour photos I realized that the space station went right through the frame. It was a cool moment that was not planned at all, but that worked out very well.

I never put an end time on my day at a wedding. I always look at the reception as something that is as big as anything else to cover on the day. As long as I am making good photos, and having fun I stick around long after some photographers would leave. This was a fun wedding to cover. After a long day of covering all kinds of events with gear slung around me I was getting pretty sore and tired by the end. It is funny how a good photo can make you forget about that pain for a little bit though. When the pain starts to creep back in you just have to make another good photo to get that adrenaline again.

With the wedding on my mind I did not make many photos last week leading up to the weekend. The week was spent cleaning and packing the gear more than using it. That being said I made a lot of photos during the weekend that I really liked. The shot above is one example of those. It is by far the best three legged race photo that I have ever made. Of course this is the only time in my life that I have shot a three legged race. You can find my favorite photos from the week here.

Over the course of the last couple of years I have had the pleasure of working with Brendan Bergen at Xavier. Our first meeting  in Nashville a couple of years ago comes down to more chance than anything. I was the photographer that he picked out of the people that had sent him emails immediately after Xavier was chosen for the NCAA Baseball tournament. Since that time I have worked with him in a few different cities including a return trip to Nashville for the NCAA basketball tournament this past spring. It has been a pleasure working with him, and it was an honor to be chosen to document his big day. By the way to bring it back to sports Brendan crushed a double during the kickball game.

Photographing A Wedding For Real

I have been at weddings the last two weekends. For the first one I was a guest, and I struggled at times with the fact that all I had with me was a point and shoot camera. I saw moments, and I would twitch as I wanted to make photos of them. This past weekend I had my gear, and I could act on the moments when I wanted to run in and capture the moment. I couldn’t think of a better group to photograph. They were amazing the entire weekend. It is easy to make good photos when you have a lot of great moments to capture through the weekend.