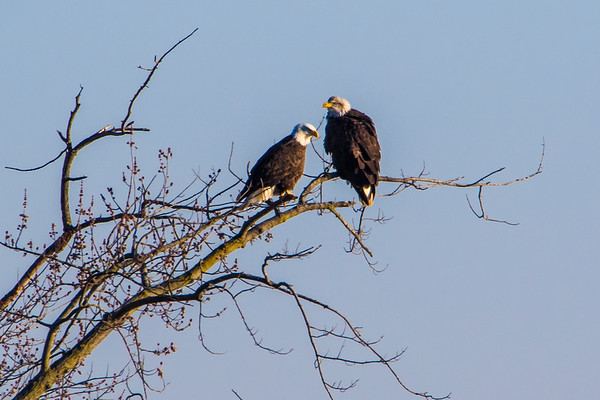 Watching The Bald Eagles Of The Wabash Again

It has been a slow winter as far as bald eagles goes so far. That is until yesterday. I almost didn’t go down to the Wabash River because it has been so slow. I had other things that I wanted to get done. When I pulled up and saw a long mature eagle sitting in a tree I decided to stay a while and see what exactly was going to happen. The lone eagle was behind a branch, but sometimes you just have to wait a while to see what happens. Another eagle joined it, and they sat out along a branch almost posing for me. There was not great action photos yesterday, but this was enough to start the season.

I knew when I bought this lens that it would not stack up to the Canon 600mm f/4. There is a reason there is a $10,000 difference between the two lenses. For some reason this lens so far does not seem to be functioning properly for me. When the subject is still it is okay. When the subject is in motion though there is a weird look to the image. I can’t really put my finger on it, but it is almost motion blur. I am shooting at a high enough shutter speed, but I did have the image stabilization on. Maybe that has something to do with it. I need to run another test with the IS off to see if that makes the image better.