This year I made a point to get out and make more images of the campus that is just down the road from me. In the past it was something that was so close that I could just do it tomorrow. When you think like that then you never make it out to make photos. This past year I made many trips to campus to see what was going on. They didn’t always pan out, but over the course of the year I built a set of photos that I was proud of. Here are seventeen images from campus this year that I really liked.

17. I have enjoyed making photos of the John Wooden sculpture at Mackey Arena since the first time that I saw it. The trouble at some point though is that you have kind of tried everything when it comes to it. Here I was able to get a different look with the use of flash.

16. I really had some fun on snowy mornings on campus. Last winter I had more time in the morning to mess around so I could sit and wait for a picture. Here I was waiting for something interesting to come towards me. The umbrella was what I was looking for.

15. This was a shot that was in no way planned. I walked up to the Boilermaker statue to make a photo of it. As I was walking back down I saw this student up against the outer wall of Ross Ade Stadium. That incline combined with the snow was fairly interesting to me. It was something different that I was able to make by just being there on campus. 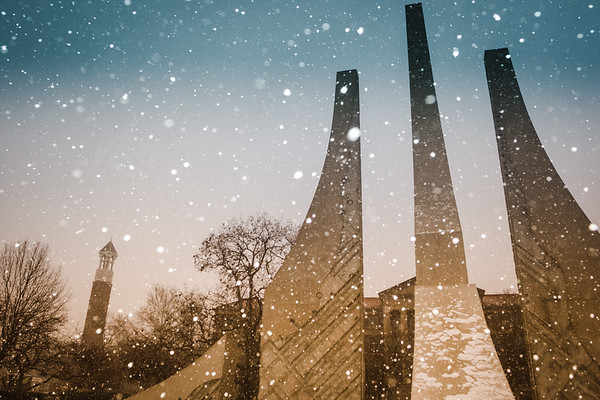 14. Campus is really an amazing place when it snows. You can probably tell that in the fact that every photo on this countdown so far was made on a snowy day. Here is a familiar scene on campus with the engineering fountain along with the bell tower. The snow really makes it magical though. As I look at this photo I realize that it was one of my favorites from the year. Why did I rank it so low when I made this list up?

13. The Boilermaker comes to work every day no matter what the weather is. Here he does his thing as the snow falls down all around him. When I made this against the grey sky I knew that I would treat it this way taking the sky to white. I love this look, and it fits the Boilermaker well I think.

12. On a fall day I took my quadcopter up on campus to get a look at the stadiums in the fall. I had the idea to make a very large panoramic which actually turned out. Here I was able to cover a lot of ground even though my lens would not take all of this in at once. I like this idea, and I need to use it more than I do. 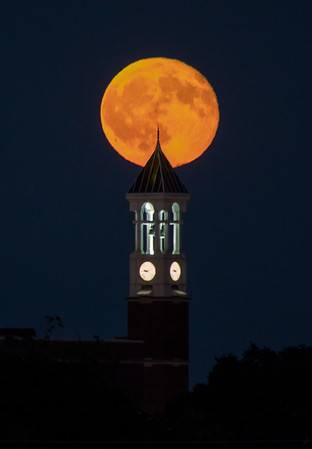 11. It seems like I have mentioned my friend Trevor Mahlmann in this countdown a lot. This shot would not have been possible without him. The full moon rising over the bell tower was his idea, and it worked perfectly. The only reason this shot is not higher on the countdown was that I don’t think I quite executed this well enough. Next time this happens we need to get someone to light paint the bell tower for us.

10. This was a fun way to spend a couple of hours on campus. I made photos on the ground, and then went to the air as the sun started to set. The sky did not light up like I hoped it would, but it is still a good photo. I need to repeat this on another day when the sky does cooperate for me.

9. This was my first real quadcopter photo of campus. I liked this idea of getting up close and personal with the tower and letting campus sprawl out behind it. I thought that it was very successful for a first attempt. I really need to get out and try this again. I think that it would look good at sunrise with campus backlit from the sun rising. 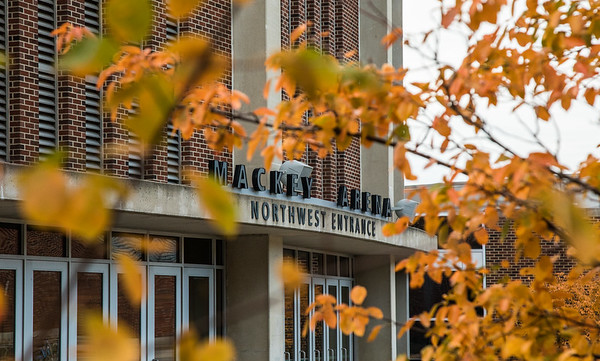 8. You can’t beat fall on campus. Here the bushes outside of Holloway Gymnasium frame Mackey Arena a bit. I spent a few mornings walking campus just looking at the beauty, and occasionally documenting it. One thing that you get when you walk campus is a sense of how much time has gone by. It has been a while since have walked campus. 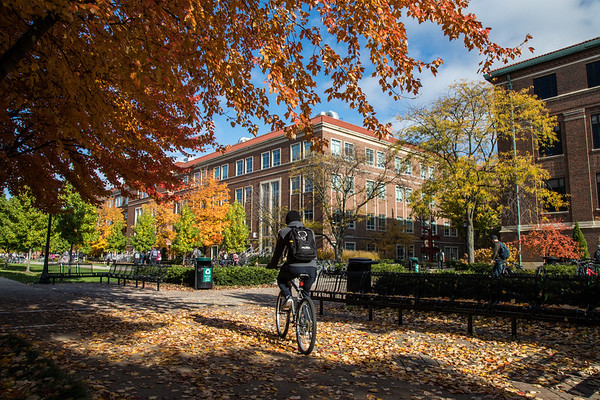 7. Here I sat down on a bench and waiting for the scene to fill up. I knew that I had something here, but I didn’t really have a subject. I waited and waiting for something interesting to find that patch of light right in front of me. My patience paid off and I was able to make this photo.

6. Can you tell that I love the bell tower? I made this photo after walking out of a show at the Elliott Hall of Music one night. What great timing to come out right at blue hour. While the family started heading towards the car I got lost and made a photo. Kind of a standard night out with me. My favorite colors all together at once.

5. Speaking of my favorite colors together here they are again just a few feet away from where I made the photo above. I was on campus in the spring trying to get some of the early color as it made everything look a little better again. I was not having much luck, but I did catch the sun just off to the side of the bell tower. I really liked the way that this turned out. 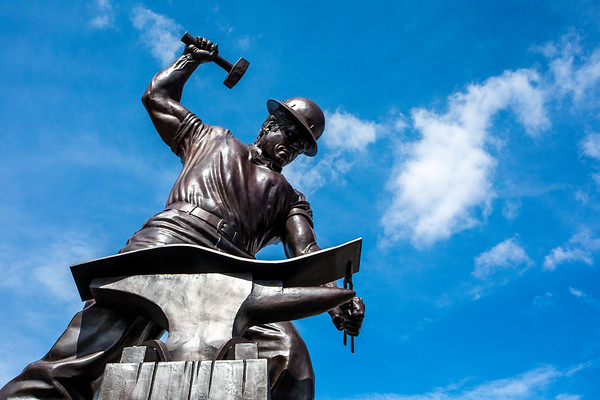 4. This photo makes the countdown because of that sky. It is an nice blue sky behind the boilermaker as he does his thing. I am always trying to find a new way to photograph the boilermaker. For some reason I am drawn to him in bad weather. Here he looked great on a good weather day.

3. For some reason when I made this photo I had the idea of giving it an older looking treatment. It is an older building on campus in the snow, and I wanted the photo to look vintage. I loved the way it turned out. I often include Hovde in my photos, but I rarely feature it. I need to change that this year.

2. The statue of Neil Armstrong is one of the coolest things to photograph on campus. Here he looks great as a heavy snow falls down around campus. Neil is another subject that I need to photograph more next year. It is hard to believe that he has been gone over five years.