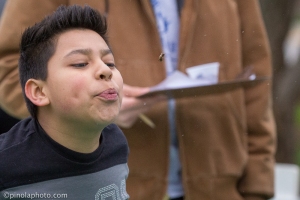 Photo of the Day

Today I had an idea for a different kind of photo shoot. Every year Purdue holds a Bug Bowl on campus. Last year I was looking for ideas for my photo 365 project, and somehow I did not know about this. I said then that I would take some pictures this year if given the chance. I parked in one of the Purdue garages and made my way to the Purdue Memorial Mall. Every year the Purdue Entomology Department hosts a Bug Bowl that allows people to get up close and personal with the insects. I don’t think that they can get any closer than the cricket spitting contest that is held. Contestants take a living cricket and put it in their mouth. They then spit it as far as they can. I was told that the crickets are frozen, but as long as some of the spitters kept them in their mouths they couldn’t have been very frozen when they were finally spit out. As a side note the longest attempts seemed to come from those who kept them in longer. Maybe there is something to that. The longest attempt that I saw today was over 29 feet. That is amazing to me. I would say that the person was practicing at home, but I hope not.

I tried a couple of angles to get a good shot of this, but nothing really seemed to jump out at me. It was only as I was leaving that I saw that being farther away from the action seemed to work the best. I walked down a bit from the spitting line, and captured this shot. I am glad that I decided to do it because I picked up some very good images in a short period of time here. You can only watch so much spitting though so I went home before the competition was complete.

When the shot was imported I used my Baseball (Day) preset to get it close. The only other edit was a very small crop. I shot a little loose today because of the variance of each spitter. I knew that some cropping would be necessary later on. I was very happy with this shot, and that is why you see it above. If you want to see more of my pictures from today you can check them out on my Facebook page here.

One Reply to “Spitting Crickets”